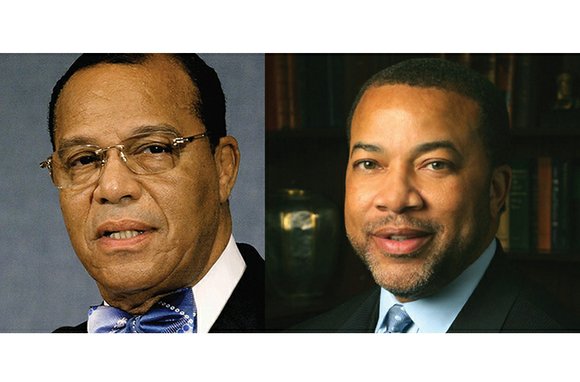 The Nation of Islam will team up with 100 Black Men of America, an influential national black male organization dedicated to improving the quality of life within communities, to reinvigorate local organizing committees nationwide to move their agenda forward.

Minister Louis Farrakhan revealed his detailed plans before a group of about 200 people in Washington last month, following the 20th anniversary of the Million Man March on Oct. 10.

“I didn’t create the march. It was God,” Minister Farrakhan said. “It was a peaceful event and there was no drinking, no smoking. It was a glimpse of heaven.”

Minister Farrakhan said that his organization, along with 100 Black Men and other committees, will work to develop nine ministries in the black community to help improve people’s lives.

Those major ministries are in the fields of education, justice, health and human services, agriculture, science and technology, trade and commerce, and arts and culture. Another ministry will focus on the spiritual development of people of color that will be led by ministers called by their deities.

Minister Farrakhan provided some details in his plan, such as the need for black people to buy more real estate and take control of the education system in their communities.

“You cannot have economic development without ownership of land,” he said. “We should develop a curriculum that we control. Black people are the only race on the face of the earth that is educated by others.”

Minister Farrakhan said that black people should leverage their votes for concrete resources and policies that will benefit the race. “As we get stronger, we should form our own political party,” he said.

In the past, membership in local organizing committees (LOCs) consisted mainly of members of the Nation of Islam, he said. But that won’t be the case going forward. “We need to grow beyond our group,” he said. “The LOCs should be strengthened with people who have skills in organizing. Those of you skilled in organizing need to teach it and show us how to do it.”

Thomas Dortch, chairman emeritus of 100 Black Men, said the organization is happy to work with the Nation of Islam and the committees. “Name me one other person who can send out a call and have 100,000 or 1 million respond,” Mr. Dortch said.

Mr. Dortch said his organization will recruit 10,000 men and 10,000 women to work on improving the black community, just what Minister Farrakhan called for in his speech on Oct. 10. One of the criticisms leveled by some black leaders after the 1995 march was that there was no legislative agenda to present to the federal government or the individual states. Both Minister Farrakhan and Mr. Dortch said that the 1995 march was about black men atoning for their sins and taking responsibility for their families and communities.

Following the 1995 march, Minister Farrakhan called for an independent black political movement and a separate, self-sustaining black economy. He also demanded the U.S. government pay reparations to descendants of slaves.

In moving forward with action this go-around, Minister Farrakhan gave a copy of “The National Agenda: Public Policy Issues, Analyses and Programming Plan of Action for 2000- 2008” to attendees at the post-march meeting.

“You have the power to bring about the change you desire,” he told the audience members.