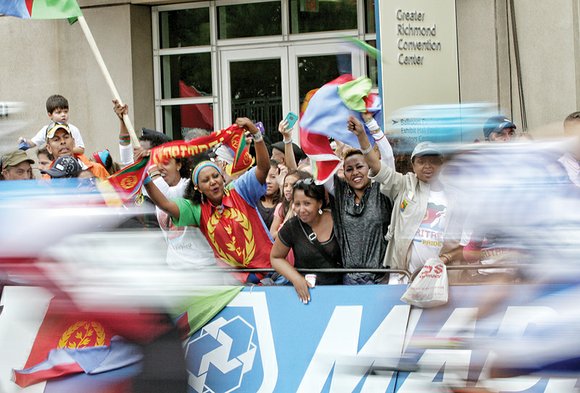 “It just feels good that we are represented,” said 17-year old Waganta Olgbagiorgis, who traveled from Philadelphia with a group on a chartered bus. “It’s just amazing to see our athletes out there. I’m proud.”

The mix of national pride and the unified celebration made UCI such a unique event. As the races moved from trials to the final competitions in men’s and women’s events, the crowds increased in number and enthusiasm.

Even the Richmond Police Department caught the spark, serving as security and goodwill ambassadors from beginning to end — directing traffic, answering questions and even snapping shots of fans who wanted to pose in the center of the course.

Huge crowds gathered on Libby Hill in the East End to cheer on the Men’s Elite Road Race cyclists.

Still for some, it was the worst of times

The aggressiveness of the city to ensure a safe and conducive race environment may have worked too well.

Many people were scared away by the mention of the sheer size of the crowd expected, the messages about street closings and the warnings that parking would be at a premium.

Chesterfield resident Loren White and six of her girlfriends were hoping to mix a birthday celebration with the excitement of the second day of the races, but they were sorely disappointed.

“No one was out,” said Ms. White, explaining that the group gave up after going to several popular Shockoe Bottom nightspots. All the venues were dead.

“We were the only ones in there! And the streets — it was like a ghost town,” she said.

With residents avoiding the traffic confusion and not willing to take a gamble on getting towed, popular nightspots, restaurants and vendors took it on the chin.

Cyclists make the grueling climb up the steep cobblestone hill Saturday on 23rd Street in the Women’s Elite Road Race.

“I’ve already taken a loss,” said Malcolm Andress III, president of Soul-Ice. Mr. Andress, who has been operating carts of fruit smoothies-icees since 2007, said he invested a lot of money in bolstering his inventory for the races. But with his cart positioned on 9th Street beside City Hall last Friday, the Pittsburgh native’s treats were too far from fans who were clustered mostly around the finish line three blocks away.

“The city marketed street closings and traffic. They should have marketed the event,” Mr. Andress added.

Richard A. Waller Jr., owner of Waller & Co. Jewelers on Broad Street between 1st and Foushee streets, watched late Friday as dozens of cyclists sped past his family business to the din of thousands of cheering fans.

“I like the cyclists, but the races have not been good for our business,” said the 77-year-old who enjoys cycling and became a member of the Richmond Area Bicycling Association in 1976.

The opening weekend of the races, his business suffered “the worst Saturday since I’ve been on Broad Street,” which is 1970, he said.

With the street closures and anticipated crowds, many of Mr. Waller’s regular customers stayed away, he said. So he shut down his store on the next to the last day of the races and headed to North Carolina for a family reunion.

“If we had been doing more business, I would have found a way to keep the store open. But it was not worth it to me,” he said.

The bistro, located at 7th and Broad streets, was positioned close to the action and the finish line. Coda even adjusted its serving hours to accommodate the early morning crowds. Patrons could drop in for a breakfast parfait, a sandwich at lunch or early dinner seating, all without missing a moment of race action.

“We’ve been very aggressive in our marketing,” said Katharine Peterman as she operated Coda’s refreshment station in front of the National Theater.

“We passed out fliers and stayed out here on the street the entire time. But I have to admit we have the advantage being right here at the finish.”

Even the vendors who were less than pleased with the bottom line from the 10 days expressed support for the city and its willingness to take on the challenge of hosting an event of this size.

“I hope there are more things like this in Richmond,” said Mr. Andress.