City is canvas for Arts in the Alley 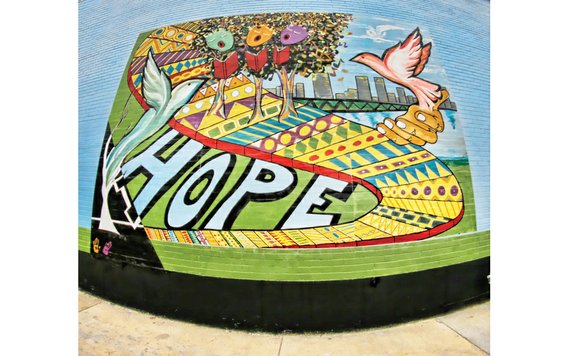 Chris and Jeanine Guidry are changing the face of Richmond’s alleys and streets one mural at a time.

During the past two weekends, the husband-and-wife team completed their 100th project through Arts in the Alley, a nonprofit Ms. Guidry co-founded eight years ago to clean and decorate neglected alleys as a way to better the city.

Aided by a dozen volunteers, they added three colorful murals to building walls in the retail corridor of Barton Heights at North Avenue and Brookland Park Boulevard. The largest, a mural about hope, now fills a wall outside Dream Academy, a nonprofit high school at 2 E. Brookland Park Blvd.

Ms. Guidry said the mural is special because it is the creation of three women serving time in the Richmond jail who received the support of Richmond Sheriff C.T. Woody Jr. to undertake the work with Arts in the Alley.

She said Arts in the Alley got help from Eric Okdeh of the City of Philadelphia Mural Projects Program, who taught them how to develop murals on the material and properly mount them.

A native of the Netherlands, Ms. Guidry started Arts in the Alley in 2008 as a sideline for her band. She is lead singer of a five-member, Christian rock group called Offering that she organized in 1999 after settling in Richmond.

Seeking to do more than make music, she and the band’s drummer, Greg Collins, dreamed up Arts in the Alley.

“We didn’t know what to expect when we put out the word about our first project in Shockoe Bottom,” she said. To her surprise, 100 people showed up to help make it happen.

Now, volunteer artists and ordinary people turn out “in the name of community, togetherness, creativity and a desire to be part of the solution,” she said.

Mr. Guidry, a West Point graduate who met his wife while working with an overseas relief agency, serves as the project manager and coordinator for the mural project. He also is the technician and soundman for the band.

The group gets the necessary permits and permission and then uses social media to invite participation. On each project, the group first cleans and then paints an exterior wall.

Anyone can participate, Ms. Guidry said. The volunteer artists simplify their creations so that “it’s like a paint by number” that the painting volunteers can easily work on, she said.

Each mural costs about $1,000 to complete. The Guidrys often have to dip into their own pockets because grants and other financial support have not been easy to come by.

One foundation turned down a grant because Arts in the Alley did not have a paid staff, she said. “For us, $10,000 would be huge.”

But even if money remains tight, she and her husband are committed to adding more murals.

“Somehow, once we decide to do a project, things come together.”