Morrissey pulls out of Senate race 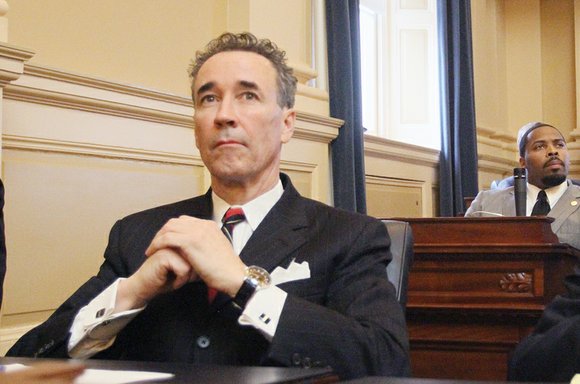 Petersburg state Sen. Rosalyn R. Dance may have an easier road to victory on Election Day in November in her bid to win her first full four-year term representing the 16th Senate District, which includes most of Richmond’s East End.

Her only opponent, independent candidate Joseph D. “Joe” Morrissey, ended his campaign this week due to a medical issue, a paralyzed left diaphragm, which interferes with his breathing.

While Mr. Morrissey told the Free Press Wednesday that he was withdrawing from the race, his name will still be on the ballot in the six localities that comprise the Senate district. Along with Petersburg and part of Richmond, the district also includes parts of Hopewell and Chesterfield, Dinwiddie and Prince George counties.

“It’s too late to remove his name. We’ve already printed the ballots,” said Richmond Voter Registrar Kirk Showalter, now preparing for the start of absentee voting next Wednesday, Sept. 16, or 45 days before the Nov. 3 election.

Mr. Morrissey suspended his campaign last Friday and again traveled to the JFK-Johnson Rehabilitation Institute in Edison, N.J., to consult with doctors. He returned to Richmond during the Labor Day weekend.

“Suffice it to say that the most important things are my family and my health,” said Mr. Morrissey, who will celebrate his 58th birthday later this month. “Elections take a distinct lower priority.”

He said, however, he would continue to represent clients of his law practice, and he did not rule out a run for mayor of Richmond next year.

“I was surprised to hear of Mr. Morrissey’s health issue. I wish him well and will pray God grants him a speedy recovery,” Sen. Dance wrote in a statement.

A former delegate and mayor of Petersburg, Sen. Dance won a special election last fall to fill the term of civil rights attorney Henry L. Marsh III, who is now a commissioner on the Alcoholic Beverage Control Board.

She easily won the Democratic primary in June to run for a full term, but was facing a tougher contest in the Nov. 3 general election against Mr. Morrissey, a former delegate and former Richmond commonwealth’s attorney.

Mr. Morrissey said that the paralysis of the left half of his diaphragm was discovered in 2012 during an annual checkup. He said he was sent to a New York specialist and underwent an operation that year to correct the problem. He said the diaphragm problem was found to be recurring about seven weeks ago and confirmed by doctors at the JFK-Johnson medical center.

The diaphragm is a large muscle below the rib cage that helps the lungs take in and expel air.

He said he is “beginning an aggressive course of physical therapy” on the advice of his doctors, who hope he can build up stomach muscles that will help him avoid more surgery. He said he is otherwise in good health, which his personal physician confirmed.

He said his decision to end his campaign “is firm.”

“This is the ‘new Joe,’ ” he said. “The ‘old Joe’ would have continued to campaign with everything else going on. Now I’m putting this election behind me and moving on.”

His “family” involves complicated personal relationships. He is the father of four children with different women, including a baby he had most recently with his 19-year-old girlfriend, Myrna Pride, with whom he lives in Richmond.

He served 90 days in jail earlier this year after being convicted of contributing to the delinquency of a minor, Ms. Pride, though both denied having a sexual relationship before she turned 18.

He continued to serve in the House of Delegates during the 2015 session while on work release as part of his jail sentence.

Mr. Morrissey gave up his House seat in March when he moved into the city to begin his effort to challenge Sen. Dance for the 16th Senate District seat.