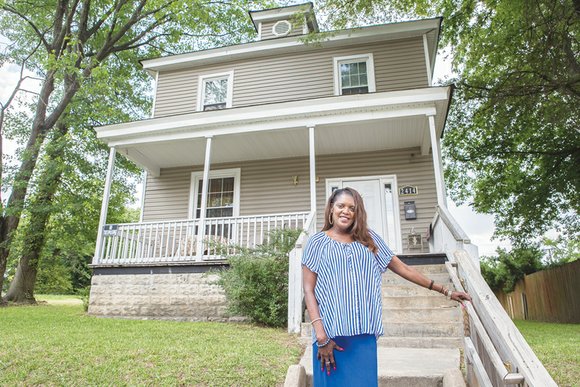 Gwendolyn H. MacClenahan stands in front of the Highland Park house she planned to turn into a group home where women released from prison could begin to rebuild their lives. Location: 2414 4th Ave. Photo by James Haskins

City Councilwoman Ellen F. Robertson has been a champion of affordable housing during her 11 years on City Council.

The 6th District representative, who previously led a nonprofit housing group in the Highland Park area, has been a staunch advocate for creation of lower-cost homes and apartments for working people and others.

Ms. Robertson also chairs the city’s Affordable Housing Trust Fund Oversight Board and has overseen the award of $1.9 million in city funds in the past year to support lower-cost rental units in five developments.

However, Mrs. Robertson has quietly blocked development in her district of a group home, called The Hampton House, for women who have been released from state prison.

The plan, developed by former teacher and human resources manager Gwendolyn H. MacClenahan, sought to respond to the hardship women can face in trying to find a place to live after incarceration, particularly if they have lost family support.

When the Free Press asked Ms. Robertson why she opposed Hampton House, her response was: “Do you have the addresses of all facilities of similar much-needed services in the city, Henrico, and Chesterfield?  Please forward. Thanks.”

Ms. MacClenahan is disappointed and puzzled.

“She didn’t want it in her district,” Ms. MacClenahan said. “Ms. Robertson never told me that explicitly, but that was the gist of what others told me about her position.”


Even though more than 150 nearby residents, church representatives and business owners signed a petition supporting her plan to open the structured group home at 2414 4th Ave. in Highland Park, Ms. MacClenahan has scratched the proposal.

“If the council member is against it, there’s no way it can go through,” she said.

Ms. MacClenahan would have needed City Council to approve a special use permit to allow Hampton House to open. She said she dropped her application, believing it would be futile to spend $1,800 to go through the process only to meet rejection.

The 54-year-old said she learned about the need for living quarters for female ex-convicts while volunteering with the nonprofit group, Bridging the Gap in Virginia, which assists felons to make the transition from prison back to society.

“What I learned is that there are group homes for men, but very few for women anywhere in the state,” said Ms. MacClenahan.

The Louisiana native said she planned to compete for a Department of Corrections contract to open a “structured and comprehensive program” for five to eight women. She believes she has the background and experience to create a successful program.

She said that the women who would live in the house would not “be out wandering the neighborhood,” but would have reasons for leaving the group home, such as going to a doctor or searching for employment.