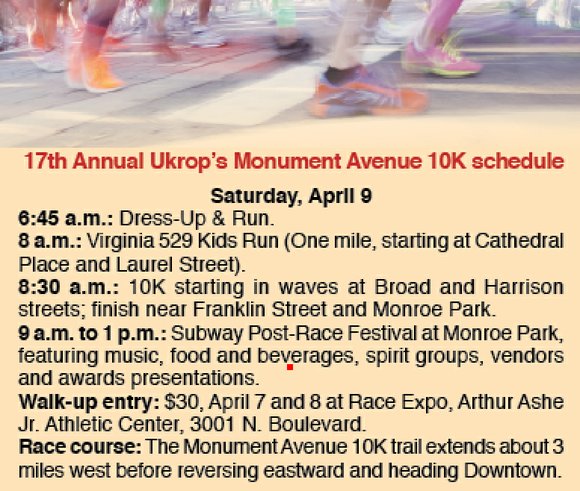 The annual Ukrop’s Monument Avenue 10K is an event long on local appeal but short on local champions.

Approximately 30,000 runners are signed up to compete on what weather forecasters say will be a rainy, cold and possibly snowy morning.

While a majority of people registered to participate live within an hour’s drive of Downtown, the overall winners likely will be members of the Collegiate Running Association (CRA) from out of state.

For the third straight year, the Monument Avenue footrace and festival also will serve as the CRA’s 10K National Road Race Championship.

Overall prize money — starting with $2,000 checks to men’s and women’s first place champions — will be awarded only to the collegiate group.

To be eligible for CRA, an athlete must be enrolled in at least one college class.

In almost all cases, these are part-time or graduate students because active college athletes are not permitted to accept cash payments beyond personal expenses.

While their times were slower than most previous Monument Avenue 10K champs, both McCandless and Taylor went on to qualify for U.S. Olympic marathon trials.

The 2014 tape breakers were Taylor and Paul Chelimo, a former athlete from the University of North Carolina-Greensboro.

The CRA estimates that nearly 5,000 of its members from across America competed in the 2014 and 2015 Monument Avenue 10K events.

This college connection represents a sharp contrast to the first 14 years of the event in which a touring contingent of Eastern African runners dominated.

Lithe, long-legged striders from Kenya, Ethiopia and Somalia won every men’s race from 2001 to 2013. Once they discovered they were ineligible for the prize money, many of the African runners scratched RVA off their racing schedule.

All of this is of little concern to the overwhelming percentage of folks who are expected to participate Saturday. For the masses, the race is about maintaining a healthy lifestyle, camaraderie and perhaps setting a personal record.

About the best a local runner can hope for is to compete for age group honors and perhaps try for the Richmond Region crown, which is for area runners only.

As long as financial incentives exist, even the most gung-ho local recreational runners will be enormous underdogs.

There is a blistering, less than 5-minute mile pace at the head of the men’s pack that few can maintain for a mile, or fraction of a mile, much less a 6.2-mile grind.

The times have slowed a bit during the transition from the African professionals to the U.S. collegiate group.

Still, the pace is beyond reality for anyone not training full time in a highly structured, subsidized program such as a college scholarship or Olympic development program. The front of the pack essentially is off limits to the working adult athlete.

The closest a local resident has come to winning was former Mechanicsville resident Robert Reynolds, who placed third in the 2014 race at 30:00. Reynolds ran for Lee-Davis High School before becoming a standout distance runner (4:14 mile) at George Mason University.

The best local female runner was 2000 champ Alisa Harvey, who ran at Jefferson High School of Alexandria before going on to star at the University of Tennessee, where she was the 1986 NCAA 1,600-meters champion.