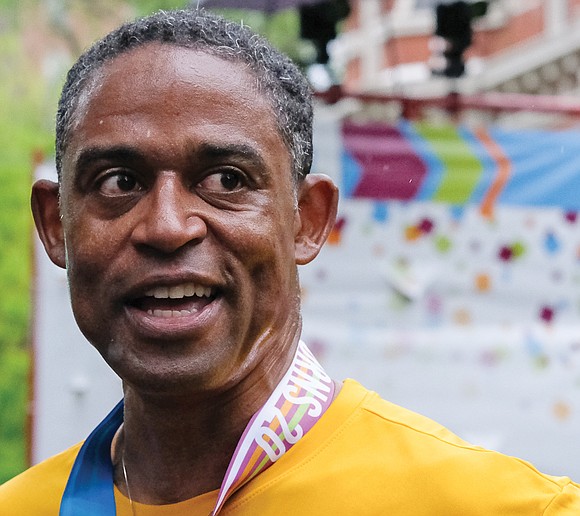 In foot-racing lingo, it’s called a “finishing kick” — that ability to grit the teeth, ignore the pain and crank up the speed as the victory tape nears.

Brian Brown used just such a “kick” last Saturday to win the Monument Avenue 10K “Dash for Cash.” The kick earned him a $2,500 take-home reward.

Brown was given about a 2-mile head start on Germano and the field of about 25,700 runners and walkers. He had about 4 miles to run compared to the 6.2 miles the other runners covered in the full course.

This marks the 12th time in 14 years that the “Dash for Cash” contestant has beat the elite runners to the finish.

“I knew they (Germano and other faster runners) were coming in hot,” Brown said. “I heard the sirens but never looked back.”

To win the “Dash for Cash,” Brown, who was randomly chosen to compete, needed to dramatically improve his per-mile time from a year ago.

“I exceeded my expectations,” Brown said. “I’m elated to have won, but I’m just as excited to have drawn attention to Massey Cancer Center.”

Brown wore a T-shirt from the center during the run. He promises to donate a portion of his winnings to the organization’s cancer research.

“I’ll keep some for myself,” Brown said. “But it’s not like I’m going out to buy a new wardrobe,” he said.

Germano’s 29:34 was the fastest run on the 10K course since Kenyan Paul Chilemo posted 29:24 in 2014. Also, Germano’s effort on a rainy morning was the best since the event’s organizers, the Richmond Sports Backers, changed the manner in which much of the prize money is distributed.

To qualify for payouts, runners now must be members of the Collegiate Running Association. The Kenyan and Ethiopian runners who had dominated the event previously stopped coming at that juncture.

Repeating as women’s champion on Saturday, Bethany Sachtleben won $2,000 with a 32:39 clocking.

Sachtleben’s time was nearly a minute faster than her winning effort a year ago and flirted with the all-time record of 32:24 set by Kenyan Magdalene Makunzi in 2007.

Among the more noticed competitors was Gov. Ralph S. Northam. Wearing a T-shirt from his alma mater, Virginia Military Institute, the 59-year-old governor negotiated the course in 1:01.37.