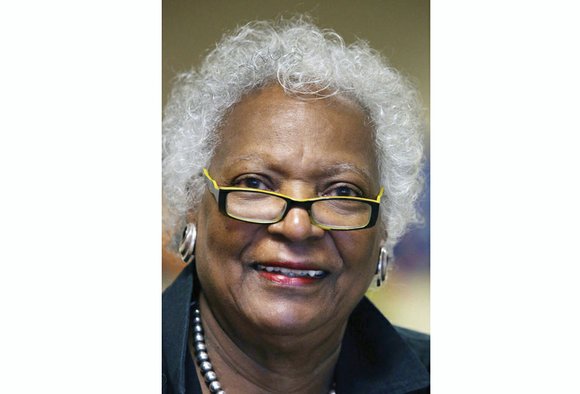 The doors are about to open at the new Black History Museum & Cultural Center of Virginia in Jackson Ward, and Marilyn H. West can barely contain her excitement.

“It represents an opportunity to observe how hard and smart work on the part of many has provided a huge return on continuing African-American history in Virginia,” says Ms. West, who serves as the president of the museum’s board of directors.

“I also am very excited about the museum’s capacity to help ensure that our youths, especially, can observe firsthand and learn from contributions made by African-Americans who, through their efforts, have paved the way for success,” she adds. The museum will open to the public 10 a.m. Tuesday, May 10, at its new location at the former Leigh Street Armory, 122 W. Leigh St. It moved from its previous location at 00 Clay St. after the armory building underwent a two-year, $13 million renovation.

The grand opening will be preceded by three days of public preview events Thursday, May 5, through Saturday, May 7. Details: www.blackhistorymuseum.org.

Among the highlights: A VIP reception and ribbon-cutting May 5; entertainment and a poetry event in conjunction with First Friday’s Art Walk on May 6; and free public tours and family activities May. 7.

The museum will be open daily from 10 a.m. to 5 p.m. and on Sundays by appointment only.

Ms. West sees the opening of the historical community treasure as “a continuing opportunity to build on a rich legacy of contributions made by distinguished African-Americans such as John Mitchell and Maggie Walker, churches such as Ebenezer Baptist Church and others that helped create the Jackson Ward culture.

“The museum will serve as an economic driver to help sustain Jackson Ward,” she predicts. Through its programming and technology at the new site, the museum has the capacity to tell the story about African-Americans with roots in or connections to Richmond, the state and America.

Those who know her are not surprised that Ms. West is among those leading the opening effort. Taking on big challenges and community betterment efforts is a way of life for her. She is chairwoman and CEO of her own company, M.H. West & Co., a management, planning and education consulting firm she launched 25 years ago.

Ms. West also has served as volunteer chair for the Go Red for Women luncheon, an annual benefit for the American Heart Association, and on the executive committee of the Downtown promotional group Venture Richmond. She also has served in various capacities with other community groups.

She has pitched in to help the younger generation by creating scholarships for students at her alma maters in her home state of Pennsylvania — Waynesburg University and Elizabeth Ford High School.

“It’s not about me,” Ms. West says. “It’s really about rolling up the sleeves and trying to help out.” Let’s learn more about this week’s Personality, Marilyn H. West:

Museum’s No. 1 project now: To experience memorable grand and official openings to demonstrate to its many investors and supporters that the BHM has the capacity to work on their behalf to continue the contributions made by many African-Americans in Richmond and Virginia.

Museum’s current exhibition: When the museum opens, the “Funky Turns 40: Black Character Revolution” exhibition will showcase more than 50 vibrant pieces of 1970s animation art. In September, a traveling Romare Bearden exhibition, “Vision to Activism,” will replace it and continue through December.

Why: The BHM can’t sustain itself on one individual, business or leader. It will take a diverse team of partners to realize and sustain the BHM vision.

When and how I got involved with the Black History Museum: I was asked by former BHM board members and leaders such as Barbara Grey, Roice Luke and Stacy Burrs to become involved.

Why I wanted to serve as president: It was not part of my vision to serve as president, but rather to serve with the team of other committed leaders who were passionate about taking the museum to another level. I am proud and privileged to serve with the likes of Stacy Burrs, Dr. Monroe Harris, Bessida White and Hossein Sadid and to represent all the prior leaders and African-American pioneers upon which the current leaders stand.

My No. 1 goal as president: Help leverage the investment made by the museum’s many partners such as the City of Richmond, Dominion and Altria, The Virginia Community Development Corp., the M Companies LLC, the Richmond Chapter of the Links Inc. and so many other business and community leaders, the media and the public at large to ensure that the museum is sustained into the 22nd century.

Foremost museum challenge: Sustain the energy, visibility, purpose, funding and commitment of the museum’s customers, as well as build and diversify the executives and other staff. The museum is fortunate to have Tasha Chambers as the current director, Mary Lauderdale, operations manager, and a dedicated corps of volunteers.

My plan for meeting it: Work with the board, the museum director and known experts in the business to build a business model that aligns with the museum’s strategic plan that will soon be revamped/revised.

The former museum location will: In the short term, it will continue to house the vast inventory of museum collections acquired since its inception.

How to become a member: Contact the BHM by telephone at (804) 780-9093 or by email at information@blackhistorymuseum.org.

Foremost dream for museum: That the museum becomes a gold standard for educating.

Reason: He realized his dream by using his persistence and talents to become a writer and more against many odds. I have a few letters from him that he wrote to me. I met August, who was known as Fred Kittel at that time, while working during summer breaks as a college student in Pittsburgh for the city’s Department of Parks and Recreation.

Nobody knows that I: Am writing a book about my Selma experiences where I have been forced to overcome negative experiences (past and present) to move forward.

Biggest change in my life: Marrying and relocating to Richmond from Pittsburgh. I was on a track to go to medical school, which seemed to be a logical next step after playing a leadership role in the planning office of Western Pennsylvania Hospital and serving previously as a bio-statistician in a local health department in Pittsburgh.

When I get restless, I: Create digital art pieces for my M2ARM Art Gallery.

Best thing my parents ever taught me: The sky is the limit and give back/share what you have with others in need.

Next goal: Spend more time with my husband, children and two beautiful grandchildren, Reagan Danielle and Daniel Marcus Jr.; go fishing, play tennis and bridge. I also want to help fill the pipeline with younger leadership. We have many talented millennials who need a chance to demonstrate their capability at the governing board and executive levels in businesses of diverse industries.