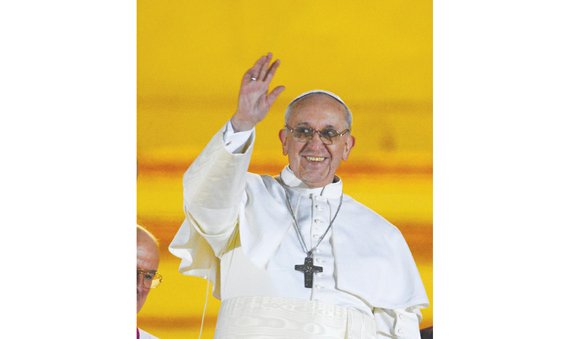 Pope Francis calls in his new book for Roman Catholic leaders to be compassionate shepherds to a “wounded humanity,” not lofty scholars quick to condemn and exclude people who don’t obey church teachings.

The book, “The Name of God Is Mercy,” breaks no new ground but is a compelling restatement of the themes of Pope Francis’ papacy told in simple, breezy language in a freewheeling conversation with veteran Italian journalist Andrea Tornielli.

In the 150-page book, the pope also repeats his often-quoted “Who am I to judge?” statement about homosexuals, saying that “people should not be defined only by their sexual identities.”

The question-and-answer book, to be released on Tuesday, coincides with the Jubilee Year of Mercy, during which the world’s 1.2 billion Roman Catholics are called on to seek forgiveness and to forgive.

In his first book aimed at a general readership, the pope appears to chastise conservatives in the church, saying they are undermining mercy in the name of doctrine.

“The church does not exist to condemn people but to bring about an encounter with the visceral love of God’s mercy,” he said, adding that “humanity is wounded, deeply wounded.”

Pope Francis criticizes those in the church “who are only used to having things fit into their pre-conceived notions and ritual purity instead of letting themselves be surprised by reality, by a greater love or a higher standard.”

The Argentine pope, who has called for the church to reach out more to people on the margins of society, the suffering and victims of injustice, has faced stiff resistance from conservatives in the Vatican who fear that he is undermining traditional teachings on moral issues.

In particular, he wants the church to show more compassion for homosexuals as well as for Catholics who divorced and remarried outside the church and are thus banned from receiving communion.

“We need to enter the darkness, the night in which so many of our brothers live. We need to be able to make contact with them and let them feel our closeness, without letting ourselves be wrapped up in that darkness and be influenced by it,” Pope Francis said.

He warns against pride, hypocrisy and smugness in the church. “We must avoid the attitude of someone who judges and condemns from the lofty heights of his own certainty,” he said. Church leaders should beware of “caving in to the temptation of feeling that we are just or perfect.”

In his answer to the one question about homosexuals, the pope defends his now famous “Who am I to judge?” remark, made in 2013, saying he was paraphrasing existing church teaching.

“Before all else comes the individual person, in his wholeness and dignity. And people should not be defined only by their sexual tendencies; let us not forget that God loves all his creatures and we are destined to receive his infinite love,” he said.

Rather than making homosexuals feel isolated or abandoned, he said he preferred “that they stay close to the Lord, and that we pray all together.”