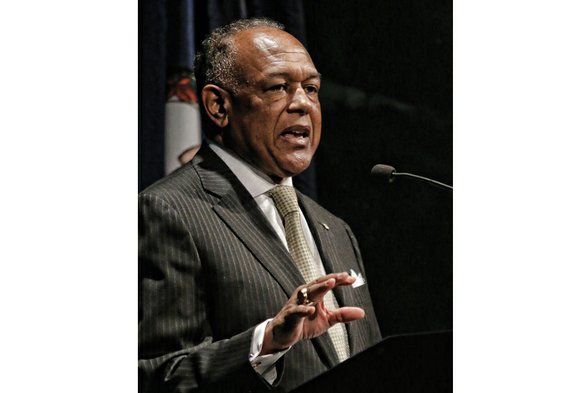 Most of its schools are decaying, its streets are falling apart, its parks and public buildings need renovation — but it has maxed out its credit card and can’t afford to borrow any more money.

According to Mayor Dwight C. Jones, there is only one way to fix the problem: Raise taxes so the city can afford additional borrowing.

It’s a reversal of the mantra Mayor Jones arrived in office with — that Richmond “cannot tax its way” to prosperity.

Under a plan unveiled Monday, the mayor called for creating the city’s first cigarette tax and boosting city taxes on real estate, cars and personal property, admission tickets, car licenses and restaurant meals in the next budget.

With six months left before he leaves office, and with multiple candidates jockeying to replace him and fill seats on Richmond City Council, it is unclear whether his plan will go anywhere.

After all, he presented his final budget this year, and it will be the next mayor who will be presenting the 2018 budget. Nor is it clear that the nine City Council members will buy into the plan — including new members who will fill at least three seats incumbents are leaving.

Council President Michelle Mosby, a candidate for mayor, said she welcomes the proposal, but needs more information before taking a position.

Still, the proposal makes clear the size of the challenge that Richmond is facing.

According to the plan, Richmond would need to borrow $1.5 billion in the next 10 years to bring its buildings and infrastructure up to snuff.

But that money is out of reach, according to the plan.

“Serious and even chronic budget challenges have resulted from tax reductions followed by an economic recession,” according to information in the plan. “The city has operated for almost a decade with no revenue growth” — and certainly insufficient funds to address numerous school and city needs.

The plan the mayor unveiled would cover only about $583 million of those needs, or just about one-third.

Called the “Triple-Action Investment Plan,” the proposal created by the city’s financial adviser, Davenport & Co., provides a way for the city to boost its borrowing — by linking to tax increases.

Under the plan if approved by City Council, the city would raise its self-imposed debt ceiling from 10 percent of the budget to 12 percent — allowing the city to borrow more than $580 million in additional funds during the next 10 years.

That includes $234 million to improve school buildings and $350 million for city projects during the 10 years.

School officials said that kind of money would enable them to address “capacity needs,” which are becoming critical as the school-age population grows in South Side.

According to Assistant School Superintendent Tommy Kranz, that kind of money would ensure RPS could replace Greene Elementary School and Elkhardt-Thompson Middle School with new, larger buildings, which he considers a necessity to handle growth south of the James River.

Under the investment plan, council would need to adopt a strategic funding plan that would prioritize all city capital needs and determine the amount of new revenue required to cover costs and support the initial borrowing allowed by an expanded debt capacity.