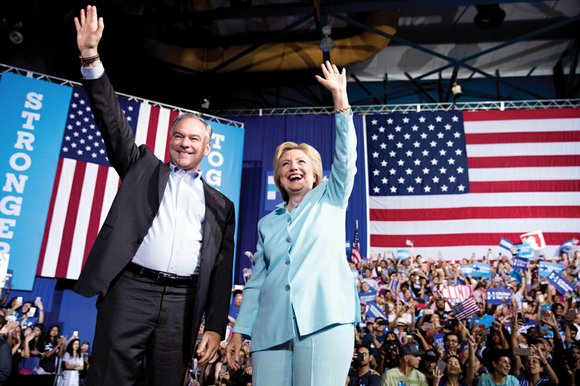 He has been Richmond’s mayor, Virginia’s governor and a U.S. senator.

Wednesday afternoon, the nearly 5,000 delegates to the Democratic National Convention in Philadelphia roared “aye” in nominating by acclimation the 58-year-old Richmond resident to be the vice presidential candidate on the ticket with the first woman ever to receive the presidential nomination of a major party.

If the ticket wins, Sen. Kaine, too, would make history as the first Richmond resident and the third Virginia resident to win the No. 2 executive position — the last being John Tyler who became vice president in 1841 and went on to become the U.S. president after the sudden death of his Charles City County neighbor, William Henry Harrison.

For some seeking a more daring pick, Sen. Kaine is viewed as a bland pragmatist. Despite an 8-0 record of election success since he first ran for Richmond City Council, even he describes himself as “boring.”

Mrs. Clinton, though views him as a “relentless optimist” who has “devoted his life to fighting for others” and has the experience to step in as president if needed.

He also has working-class roots and a fluency in Spanish she believes could bolster the Democratic ticket in the contest with Republican rival Donald J. Trump. 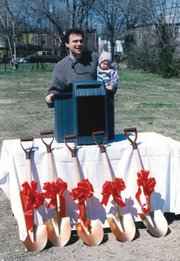 Mrs. Clinton’s choice, announced via Twitter to supporters last Friday and introduced at a rally in Miami on Saturday, came after she and advisers spent months poring over potential vice presidential candidates who could help her win.

In the end, Mrs. Clinton decided Sen. Kaine, who sits on the Senate Foreign Relations Committee, had the right stuff.

She stuck with a man with an easy smile and uncovered bald spot who is billed as a pragmatist with progressive goals who she said “gets things done.” He also is seen as sharing similar positions with her on many issues and has an interest in policy details. “I do have a fondness for policy wonks,” Mrs. Clinton has said. 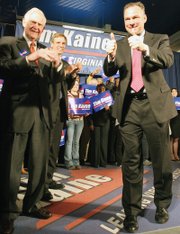 Just as importantly, Sen. Kaine is known to be personable and likeable, traits that have stood him in good stead throughout his legal and political career and that she is not known for, as her high unfavorable ratings evidence.

The Trump campaign quickly labeled Mrs. Clinton’s new running mate “Corrupt Kaine,” citing $160,000 in gifts he received during his years as governor and lieutenant governor of Virginia, all of which he had reported and none of which were regarded as a bribe, unlike the hidden gifts his successor, Gov. Bob McDonnell, accepted that led to tougher ethics laws as well as his now thrown-out conviction of selling his office.

While many Democrats — and even some Republican colleagues — were quick to praise the choice of Sen. Kaine, some in the party’s liberal wing expressed dismay, claiming that he is out of step on some core issues, most notably trade deals such as the proposed Trans-Pacific Partnership.

He also has been dinged for what some see as his past lukewarm support for abortion rights and his backing of a law that bars the use of federal funds for the procedure. He also backs easing regulations on banks and credit unions, positions that put him at odds with some in the wing of the party that favored U.S. Sen. Bernie Sanders of Vermont over Mrs. Clinton.

However, many rushed to his defense, calling him a passionate advocate of social justice, pointing to his support for gay rights and his leadership in promoting universal pre-school education and raising the profile of career and technical education.

He also has won applause for trying to gain Republican support for legislation. As he put it when he went to the Senate in 2013, he has sought to get things done by seeking “more partnership and less partisanship.”

He has several surprising talents that could serve him well on the campaign trail, including a love for music, a tenor voice and an ability to play a blues harmonica.

Sen. Kaine remains a popular figure in Richmond, where he earned a reputation for crossing racial lines in a city still marred by racial division — a key reason that colleagues on a majority-black council elected him as mayor in 1998.

He and his wife, Anne B. Holton, a legal aid lawyer, former Richmond judge and state secretary of education who resigned her post on Tuesday, have sought to reduce racial tensions in ways many did not. Entrenched in an integrated North Side neighborhood since they married and moved to Richmond in 1984, they became members of St. Elizabeth’s Catholic Church in North Side, with an overwhelmingly African-American congregation, where he has sang in the choir for 14 years.

And just like Ms. Holton’s father, former Gov. A. Linwood Holton, who promoted racial integration and sent her and her two siblings to majority-black Richmond schools, the couple sent their three children to majority-black city schools as well.

Long before he came to public attention, he also focused on social justice in his legal practice, taking on death penalty and housing discrimination cases, most notably suing Nationwide Insurance for redlining African-American neighborhoods, resulting in the a $17.6 million settlement, a record for a civil rights case in Virginia.

In 1994, concerned about high crime and faltering public education, he began his rise in politics by challenging incumbent Benjamin Warthen and winning by 94 votes to gain the seat for the 2nd District City Council seat.

In the seven years he served, including three as mayor, he left his mark on the city along with other members of the council. He was a leader in the majority pushing housing improvement through the Hope VI development to replace public housing in Blackwell and the Neighborhoods in Bloom initiative in six largely African-American neighborhoods.

He joined in efforts to reduce crime and the sky-high homicide rate that made Richmond the “murder capital of Virginia,” boosting funding for public safety and supporting the innovative city-federal Project Exile that cracked down on illegal gun possession.

During his tenure, he backed creation of the Slave Trail project to highlight the city’s major role in the buying and selling of human beings. He also backed tax cuts and tax credits that helped spark new development and helped turn around the city’s population decline. He also got behind expansion of the Richmond Convention Center, returning rail service to the Main Street Station and restoring the riverfront canals in Downtown that date back to George Washington.

He also was a leader in getting four new city schools built and finding a creative approach to redevelop the vacant Maggie L. Walker High School into a regional governor’s school.

“When I got elected, Richmond was losing population and losing jobs,” he said, trends he noted that he and colleagues on the council reversed.

The eldest of three sons of a home economics teacher and the owner of a union welding and ironworks shop, Sen. Kaine was born in Saint Paul, Minn., and grew up in Kansas City, Mo.

In his introductory speech Saturday in Miami, he said his parents instilled in him the values of “faith, family and hard work,” recalling how he and his brothers learned welding working from their father.

He attended a Jesuit high school and took a break from law school at Harvard University, where he later met his future wife, to spend a year as a Catholic missionary in Honduras, an experience he said helped shape his focus on service. He also said that the students helped him become fluent in Spanish while he taught them to weld.

His political timing for office is seen as excellent. When Emily Couric, the favorite for lieutenant governor, died of cancer in 2001, Sen. Kaine jumped into the race and won on a ticket with Democrat Mark Warner, who secured the governorship, ending eight years of Republican rule.

In 2005, Sen. Kaine won the governorship. He led the state through the massacre at Virginia Tech that killed 32 people in 2007, the largest 21st century mass shooting in the United States at that time. When the Great Recession hit in 2008, he worked with the legislature to maintain the state’s credit rating while maintaining a balanced budget.

He also took on the gun lobby by barring guns from state buildings and the tobacco industry, first banning smoking in state offices and then gaining a bill to bar smoking from restaurants and other places.

He also gained attention as the first governor outside of Illinois to endorse future President Obama over Mrs. Clinton and then campaigned to get him elected in 2008, making President Obama the first Democrat to win Virginia in 44 years.

Sen. Kaine was on the short list for vice president, but ultimately was passed over in favor of Sen. Joe Biden. However, Sen. Kaine went on to chair the Democratic National Committee for the new president for two years before returning to electoral politics in 2012. He defeated another former governor, George Allen, to gain the Senate seat.

His success statewide raises another reason for his selection, as he underscores Virginia’s rising importance in presidential elections.

At this point, polls point to a close race between Mrs. Clinton and Mr. Trump for the state’s 13 electoral votes, which some believe are needed to secure victory.

Sen. Kaine also had an advantage over other vice presidential choices. If she should win, Virginia now has a Democratic governor, Terry McAuliffe, who would appoint his temporary successor, ensuring the party would not lose a seat in the Senate. 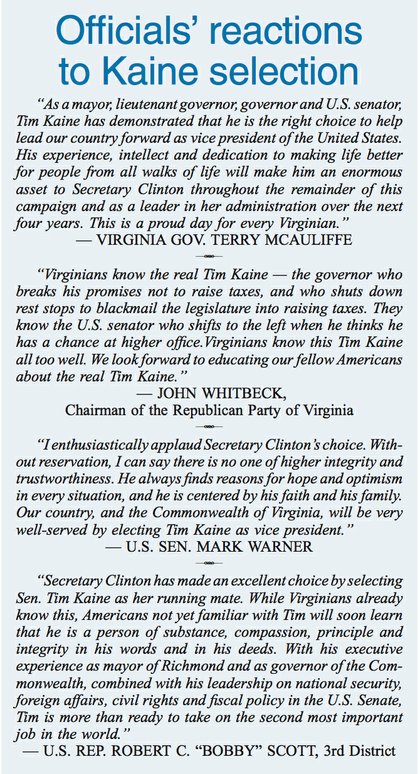 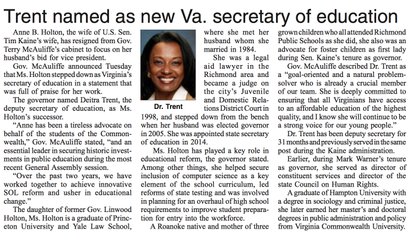