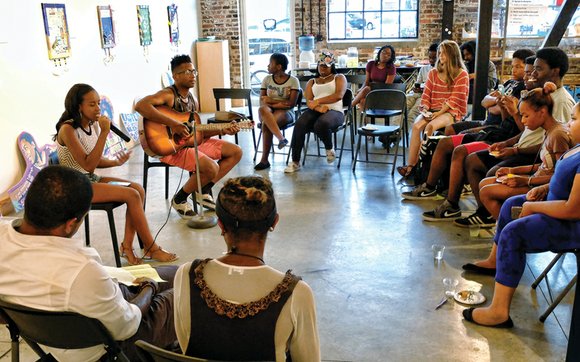 When Alton Sterling was killed by police July 5 in Baton Rouge, La., the nation watched as his 15-year-old son cried inconsolably at the loss of his father.

A day later, in Falcon Heights, Minn., Philando Castile was shot and killed by a policeman while a 4-year-old girl watched.

Richmond’s children and young adults are not immune to such tragedies. Just days before Christmas, 12-year-old Amiya Moses was killed by a bullet while playing with friends in North Side.

ART 180, the Neighborhood Resource Center and Central Montessori School hosted events last Friday for children and teens to discuss issues of violence and policing while also working toward healing and peace.

ART 180’s poetry workshop and Black Lives Matter Youth Forum drew comments from about 30 teens and adults who shared their frustrations about seeing police brutality on television and social media.

“If this is all we see, but no one is taking it into consideration, then it feels hopeless,” said one teen.

Another teen echoed those sentiments.

“People only care about the issues on social media. We need to have real conversations.”

The purpose of the forum was just that — to go beyond the virtual world and take action in the real world. The teens shared what was on their minds and learned to direct their feelings to be a part of the change they want to see.

Michael Guedri, ART 180’s program manager, said it is crucial that teens are given the opportunity to promote positive change.

“Teenagers are not far from running things in just a few years,” he said. “It’s important in the long-term game that they start to strategize, communicate and have dialogue to promote positive change.”

“Adults need to step back and allow them to be heard,” said Mr. Dortch. “Teens bring a valuable perspective that adults may miss. They have a powerful voice. It may not be the traditional way. History is filled with that.”

The teens at ART 180 vowed to act by not tolerating prejudice when they hear it and helping to educate people about societal injustice.

“Most people who say ‘all lives matter’ don’t understand that we’re in crisis right now so we need an emphasis on black lives,” said one teen.

Prior to the youth forum, ART 180 held a poetry workshop with John Blake, a poetry teacher and National Poetry Slam finalist. Mr. Blake encouraged them to write courageously.

“We’re having this discussion before writing so you understand you’re not the only one feeling this way,” he said. “Writing enables us to survive. Sharing helps others realize they’re not the only one who’s going through this pain. Sometimes we hide our pain so well that we don’t give ourselves permission to hurt and then it comes out in other ways.”

Two teens, Emporess Benniefield and Oryan Law, performed the song “Tears of a Nation” during the open mic session. The song was written after Miss Benniefield saw her mother’s emotional reaction to Mr. Sterling’s son’s grief. She realized the tragedy could happen to anyone.

A string of walkers climb the stairs to Jefferson Park, the final stop on the Three Parks Walk for Peace last Friday sponsored by the Neighborhood Resource Center, Central Montessori School and other community groups.

While young adults at ART 180 communicated through spoken word and other creative acts, youngsters ages 3 to 14 participated in the “Three Parks Walk for Peace” sponsored by the Neighborhood Resource Center and Central Montessori School. Marchers walked from Chimborazo Park to Jefferson Park. Organizers said the goal was to offer hope and encouragement during a time of chaos and pain.

Led by a police escort, about 30 community members and children walked with signs the youngsters created that promoted peace. Along the route, people came out of their East End homes and businesses to cheer and show their support.

“It’s just about peace and bringing our community together to promote peace. It gives us a moment to reflect and understand the importance of peace, keeping it in our consciousness so we can move forward,” said Kelly McCray, front desk administrator at Central Montessori School.

Vanessa Lopez, who teaches children ages 2 to 6 at the school, said it is important for youngsters to see people coming together as a community.

“People walking together allows the children to physically see the concrete concept,” she said. “They see that it impacts the community they live in, not just school.”

Kristen Evans, the mother of a 6-year-old daughter, had tears in her eyes when explaining how she discusses violence with her child.

“We talk about it from a religious perspective,” she said. “God wants us to treat all of His children with kindness. All people are God’s children. We are to take a stand when people are unkind to each other.”