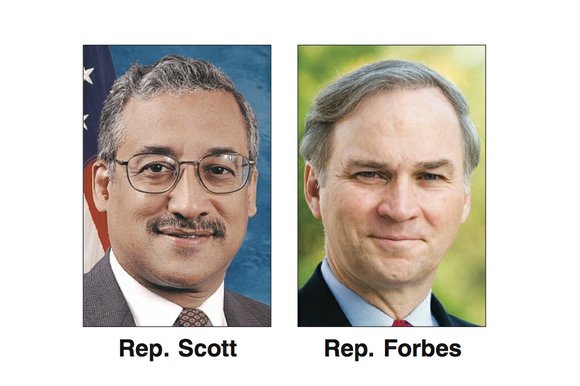 The justices ruled unanimously that three GOP House members challenging lines drawn by a federal district court lacked standing to bring the case because they could not show they were directly affected.

The ruling came three weeks before voters will go to the polls on June 14 in primary elections to choose party nominees.

Mr. McEachin of Henrico County is running against Ella P. Ward, a Chesapeake City Council member, in the Democratic primary, while Mr. Wade is running against Jackee K. Gonzlez of Chesterfield County, a Tea Party activist, in the Republican primary.

The winners of the two primaries will face off in November’s general election for the congressional seat.

The U.S. Supreme Court’s decision upheld district boundaries that all but doomed a Republican lawmaker’s chance of re-election in the 4th Congressional District by redrawing his district to include more African- American voters. The larger number of African-Americans in the district offers an increased opportunity for voters to elect a second African-American to the state’s congressional delegation.

Justice Stephen Breyer, who wrote the decision, acknowledged during oral arguments in March that Republican Rep. J. Randy Forbes of the 4th District “goes from a safe seat to a seat he’s probably going to lose.”

But the court’s brief ruling said that because Rep. Forbes chose to run in another district rather than face likely defeat in his current district, he cannot show that the redistricting plan affects him. Neither, Justice Breyer wrote, could the other Republican House members filing suit.

“When challenged by a court (or by an opposing party) concerned about standing, the party invoking the court’s jurisdiction cannot simply allege a non-obvious harm, without more,” Justice Breyer wrote. “Here, there is no ‘more.’ ”

Rep. Forbes, an eight-term congressman with seniority on the House Armed Services Committee, is competing in a three-way Republican primary in the 2nd District of retiring Republican Rep. Scott Rigell of Virginia Beach. He is not required to live in the new district in order to represent it in Congress.

Earlier this year, Democratic and minority voters also won disputes over political lines in Texas and Arizona. Last year, they prevailed in an Alabama case.