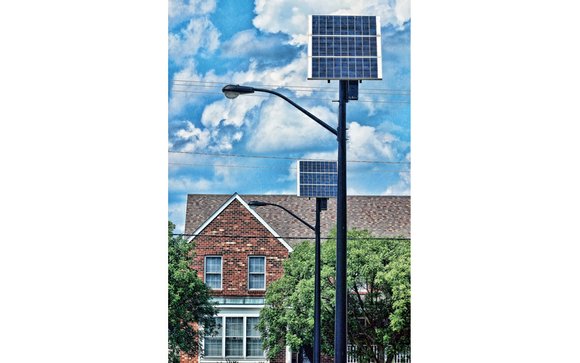 Richmond Mayor Dwight C. Jones has boasted many times during the last seven years about the solar streetlights that were installed in a West End neighborhood with taxpayers’ dollars.

He has cited the 21 solar streetlights in Randolph West as an important example of his commitment to “greening” the city and reducing the city’s impact on the environment, particularly its carbon emissions.

But outside the public view, the Jones administration no longer regards solar streetlights as the wave of the future and blocked their use in other city-supported neighborhoods, such as Highland Grove, the replacement for Dove Court in North Side.

As for Randolph West, Robert Steidel, director of the city’s Department of Public Utilities, wants to replace the solar lights in the 70-home development with standard electric streetlights. He sees the solar lamps, while less expensive, as inadequate in lighting and as not fitting with the city’s streetlight grid.

“We will fight any effort to replace the solar streetlights. Our residents love them and want to keep them. We just want them to be maintained.,” said A. Hugo Bowers Sr., a Randolph West resident who is chief executive officer of Bowers Family Enterprises, the parent of Premier Homes, which developed the neighborhood 11 years ago.

Streetlights have long been a sore point for the $16 million subdivision, which Premier undertook for the Richmond Redevelopment and Housing Authority and which is still the largest ever undertaken by an African-American developer within the city.

Initially, the city promised to install standard streetlights, but the subdivision failed to get them for years after then-Mayor L. Douglas Wilder, angered by a lawsuit Mr. Bowers brought against the city, blocked their installation.

But with support from Richmond City Council and the arrival of a new mayor, the city ended up providing the funding for their installation to the RRHA, which paid it to Premier. Mr. Bowers said the installation cost about $443,000, or about $21,100 a light.

He credits Christopher L. Beschler, then chief operating officer for the city, with the solar lighting decision, which allowed the city to save at least $1 million. Standard streetlights were expected to cost between $1.2 million and $1.6 million, or up to $76,000 a light.

The city also saved at least $3,000 a year on the cost of electricity to power the lights, a point DPU cited in lauding the streetlight installation in 2009 under a cooperative agreement the department inked with RRHA.

At that time, DPU spokeswoman Angela Fountain noted that “the Randolph West project is the city’s pilot program and will be the first use of solar lighting within a subdivision. This is an opportunity to be first to install a renewable energy source and demonstrate environmental stewardship in our community.

The city’s love affair with the lights quickly ended. By 2013, when maintenance was needed, DPU decided that the solar streetlights were not its responsibility.

Mr. Bowers, seeking to keep the lights on, said he received verbal approval from Mr. Beschler to undertake the maintenance on 16 of the lights. He said the work largely involved replacing the failing batteries that collect the solar energy and discharge it at night. He said the batteries only have a useful life of five years.

After spending $23,000, Mr. Bowers said the bill for the work was rejected by the city as unauthorized.

“That’s baloney,” he said. “When I installed the streetlights, it was done the same way. There was no written authorization. I was given verbal authority to proceed, and the work was paid for.

Meanwhile, the remaining five streetlights no longer work because the batteries have died, which Mr. Bowers said has increased the risk of break-ins and other crimes.

City Attorney Allen L. Jackson said he cannot find any evidence in the records that the maintenance work was authorized by Mr. Beschler, nor has Mr. Beschler confirmed he authorized the work. Nor did Mr. Beschler ever approve payment during his stint as interim chief administrative officer.

Mr. Beschler, who now heads the state Department of General Services, did not respond to a request for comment.

Mr. Jackson also said he cannot find any documents that show Mr. Bowers installed the streetlights in the city’s utility right of way or that the property owners authorized the installation of the lights. As a result, the city attorney said the streetlights are considered to be on private property, and the city bears no responsibility for them.

At this point, City Council is seeking to end the dispute. On April 25, at the behest of Randolph West’s representative, 5th District Councilman Parker C. Agelasto, the governing body passed a nonbinding resolution encouraging the administration to negotiate the acquisition of the solar lights to end the dispute over ownership.

It is not clear that the administration plans to move ahead, though, with Mr. Steidel adamant that he does not want DPU to have to accept the solar lights into its inventory.