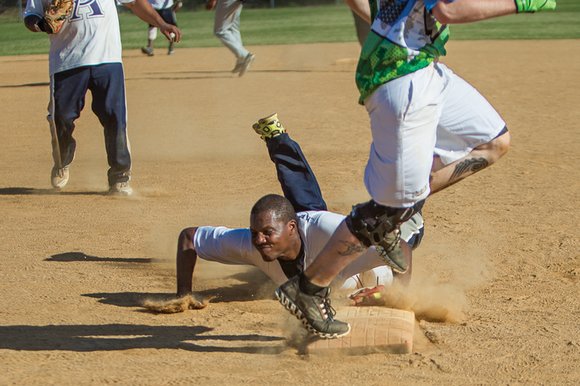 Kevin Rather of the Richmond-based Cooke’s-Allen softball team slides to tag the bag to get a runner out during last Saturday’s game against BTA at the SoftballNation N.I.T. Beast of the East tournament. Photo by James Haskins

The Cooke’s-Allen softball team, long known as Cooke’s Lawn Service, has been mowing down its softball competitors for decades.

Dating to the early 1990s, Cooke’s-Allen is among the nation’s long-standing and most successful predominantly African-American softball squads.

“And we’re still going strong — no plans of stopping,” said Bob Johnson, who refers to his team role as “administration.”

Before the rains came during Memorial Day weekend, Cooke’s-Allen was rolling with a 4-1 record in the huge SoftballNation N.I.T. Beast of the East tournament played in Chesterfield, Henrico and Petersburg. With more than 100 teams entered, the event is considered one of the most competitive slow-pitch softball tournaments on the East Coast.

The last chunk of the three-day event was canceled last weekend because of inclement weather. There is no makeup date.

Next on the team’s calendar is a trip June 4 and 5 to the Atlantic Coast Championships-Super N.I.T. in Myrtle Beach, S.C. It is part of the Black Softball Circuit. That will be followed by the annual Watt D. Newsome Memorial June 18 and 19 in Norfolk.

The Richmond-based team’s grand finale will be the Black America Softball World Series Sept. 2 through 4 in Columbus, Ga.

The team’s aggressive schedule generally calls for 10 to 15 tournaments a year under various organizing bodies.

“Charlie was a real good player in his day with 2900 Club,” recalled Johnson. “He doesn’t play now, but he loves being there, having his own team.”

Helping Cooke fund the squad this year is Attell Allen.

Johnson, a native Chicagoan, is a retired senior planner for the City of Richmond.

Johnson refers to Broadus, the left fielder, as “the fastest thing you’ve ever seen.”

On a part-time basis, Cooke’s-Allen relies on the power of Dwight Fortune and William Dillon, a former Virginia Union University football All-American.

Warfield was perhaps the area’s best-ever combination of speed and power, and no man every swatted a softball farther than the massive Jefferson.

Cooke’s-Allen is something of a spinoff of the 2900 Club, which was the first African-American team to compete in the mainstream Richmond Rec Leagues.

The 2900 Club debuted at the former Parker Field about 1974 with the likes of Jesse Chavis and Irvin Mallory-Bey, both former NFL players out of VUU. Prior to that, African-American-run teams played mostly in the Sunday “Social League” at Lucks Field in the East End and in Charles City.

The Beast of the East is the area’s largest annual tournament.

Cooke’s-Allen finished a powerful third several years ago and appeared primed for a strong run this go-round before torrential rain stopped play and rendered the fields unplayable.