At 45, the Kingsmen softball team still on top 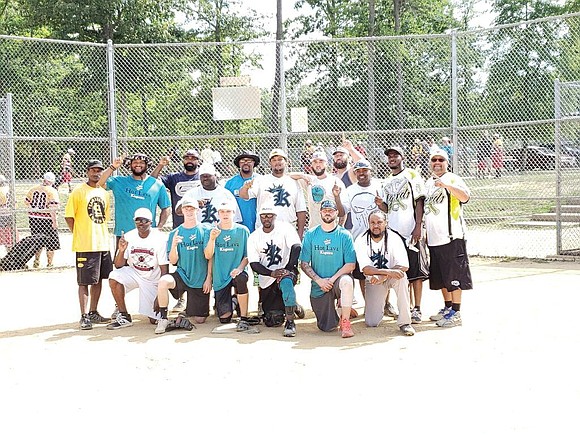 In its 45th year of operation, Kingsmen softball is still knocking it out of the park.

Befitting its name, the Kingsmen now wear the shiny crown as champion of the Black American division of the SoftballNation’s Beast of the East Tournament.

The team, under manager George Jones who founded the Kingsmen in 1974, defeated the Woodlawn Black Sox of Baltimore in the Beast of the East finals May 26 at Iron Bridge Park in Chesterfield.

“We got behind in a bunch of games, but we kept pecking away. We hung in there,” said Jones, a Petersburg High School graduate.

The Kingsmen also answer to the nickname “Hot Lava.”

The Kingsmen, who got their name from Kingston, Jamaica, posted a 6-2 overall record to best a 13-team field from multiple states.

The Kingsmen are long on both victories and nicknames. The team’s 19-year-old left-fielder is Chris Markins who answers to “Grasshopper.”

Jones himself says not all his players know his full name. “They just call me ‘Pops,’ ” he said.

The Kingsmen’s schedule will include entry into SoftballNation’s Black American Nationals Aug. 17 in the Richmond area.

Jones estimates his teams have won at last 300 tournaments overall. During a three-year stretch in the 1990s, the Kingsmen won 303 games and 33 tournaments.

Another longtime pillar of Kingsmen softball has been Rick Norris, “The Slickster.”

Jones was among the first managers of an open team to fully integrate. Among his first African-American sluggers were NFL star-to-be Ricky Hunley and his brother, Lamont, when both were teenagers at Petersburg High School in the late 1970s.

Then there was Joe Ellis, the “Gentlemanly Giant,” who swatted balls into and over trees all over Virginia. Many knew Ellis as the basketball coach at Surry High School. In 2005, Ellis, who was in final year of life, coached Surry to the state Class A title at the Siegel Center in Richmond.

Another deceased Kingsmen known for his power was Charles “Mudcake” Jackson, who also threw a blistering fastball for the Dinwiddie County Giants in a weekend baseball league.

With longevity comes the inevitable. At the Kingsmen’s recent 45th reunion celebration at Post 284 in Colonial Heights, T-shirts were handed out with names of some 15 Kingsmen who are no longer with us.

Softball teams tend to come and go, all except for the Kingsmen. To weather nearly a half century, a man must accept the highs with the lows. That’s the MO of George Jones. His famous forlorn expression rarely changes, regardless of the score.

But it’s certain he’s smiling on the inside these days while planning a Kingsmen future as bright as the past.