Ali remembered in Muslim world as a voice of change 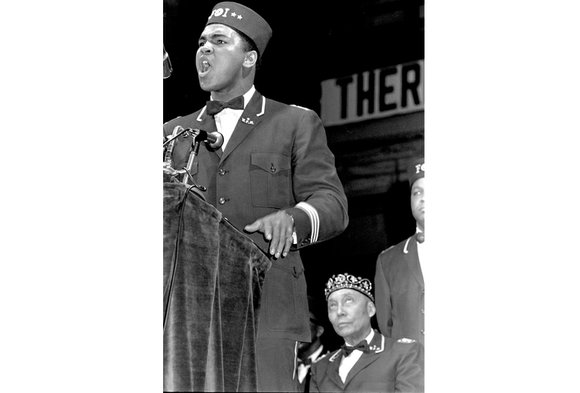 Muhammad Ali speaks at a Nation of Islam convention in Chicago in February 1968. Photo by Associated Press

Of all Muhammad Ali’s travels in the Muslim world, his 1964 trip to Egypt was perhaps the most symbolic, a visit remembered mostly by an iconic photo of the boxing great happily shaking hands with a smiling Gamal Abdel-Nasser, Egypt’s nationalist and popular president.

It was a mutually beneficial meeting: President Nasser was viewed with suspicion and mistrust by the United States, but was revered across much of Africa and Asia for his support of movements fighting European colonial powers.

For Mr. Ali, the new heavyweight boxing champion, being received by one of “imperialist” America’s chief enemies announced his arrival on the global stage as a powerful voice of change.

The boxing genius and revolutionary political views of Mr. Ali, who died last Friday at age 74, emerged when America’s Civil Rights Movement was in full swing and the Vietnam War raged on, sharply dividing Americans. In those years, the Muslim world was experiencing a post-colonial era defined by upheaval, with most developing nations taking sides in the Cold War, allying themselves to varying degrees with the United States or the Soviet Union.

Mr. Ali’s conversion to Islam won him the support of many across the region. Three years later, his refusal to serve in the U.S. Army in Vietnam — “I ain’t got no quarrel with them Vietcong” — and his subsequent loss of the world title resonated with Muslims, many of whom saw that conflict as the epitome of America’s global tyranny.

“Muslims wanted a hero to represent them, and Clay was the only Muslim champion ... No other Muslim athlete managed to achieve what Clay did ... Thus, he was a symbol for Muslims,” said Mohammed Omari, an Islamic law professor in northern Jordan’s Al al-Bayt University.

In a Muslim world with a seemingly infinite number of people called “Mohammed Ali,” the Louisville, Ky., native was mostly referred to as “Muhammad Ali Clay” — ironically retaining one of the “slave” names that he argued so hard and long for people to drop after he became a Muslim.

It was the diversity of the causes embraced by Mr. Ali during his lifetime — from the Civil Rights Movement and anti-war activism to global charity work and dealing with Parkinson’s disease — that has won him a large following among a wide range of admirers in the Muslim world. To them, he meant different things.

“The uplifting exuberance of Muhammad Ali will endure long after his passing, ensuring that the lasting political achievements of one of the 20th century’s greatest sports superstars will remain a vital part of the history of the turbulence that changed the world in the 1960s and 1970s,” Dubai’s Gulf News, a widely read daily in the United Arab Emirates, said in an editorial.

Jordan’s King Abdullah II wrote that Mr. Ali “fought hard, not only in the ring, but in life for his fellow citizens and civil rights.”

“The world has lost today a great unifying champion whose punches transcended borders and nations,” King Abdullah wrote on his Twitter account. Accompanying his tweet was a photo of Mr. Ali, King Hussein, Abdullah’s late father, and President Gerald Ford — all in tuxedos.