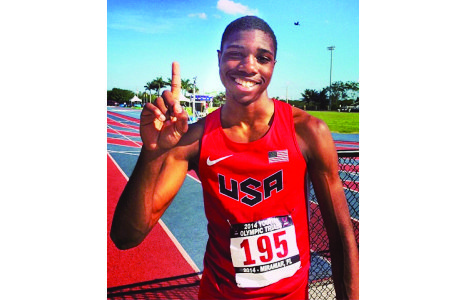 Noah Lyles has bigger fish to fry than Virginia’s 6A Track and Field Championships.

The state’s fastest sprinter, a junior at T.C. Williams High School in Alexandria, chose not to run last Saturday at the track championships Todd Stadium in Newport News after suffering a slight hamstring injury during the preliminaries.

Last Friday, he breezed to the fastest qualifying time in the 100-meter preliminary round — 10.71 seconds — but felt some discomfort in the back of his leg.

He was scratched from both the 200-meter trials on Friday, June 3 and the 100-meter final on Saturday, June 4.

Lyles’ brother, Josephus Lyles, sat out the entire meet with a quadriceps injury. Josephus also did not compete a week earlier at the Northern Division regionals.

Both Noah, 18, and Josephus, 17, have qualified for the U.S. Olympic Trials July 1 through 10 and the IAAF World Junior Championships July 22 through 27, both in Eugene, Ore.

Josephus is among 28 qualifiers for the 400 trials.

If successful in Eugene, the brothers could advance to the Summer Olympics Aug. 5 through 21 in Rio de Janeiro.

They have signed to compete at the University of Florida starting this fall. — FRED JETER