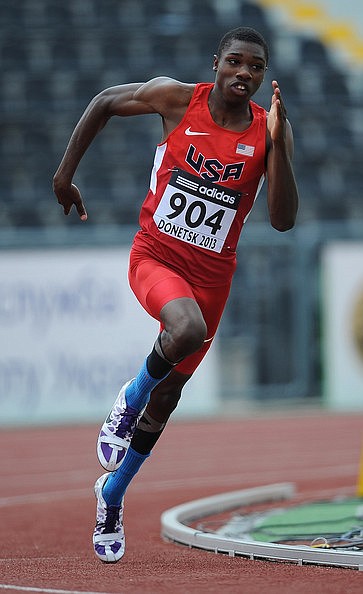 Track and field enthusiasts will have to wait another year to see the unveiling of the next “World’s Fastest Human.”

The 2020 Olympic Games set for this July and August in Tokyo have been postponed to 2021 because of the global COVID-19 pandemic.

A Virginia native is among those in contention to fill the vacancy for the prestigious title of “World’s Fastest Human.”

Noah Lyles, a former standout at T.C. Williams High School in Alexandria, might be the swiftest person on the globe now that Usain Bolt has hung up his signature gold spikes.

The flamboyant Lyles, 22, doesn’t lack for talent or cockiness. His top times of 9.86 for 100 meters and 19.50 for the 200 make him a serious candidate to win both dashes at the next Summer Games.

Lyles, also known for his flashy socks and ever-changing hair color, struck gold at last year’s World Championships in Doha in the 200 and the 4x100 relay.

Lyles, along with brother Josephus Lyles, originally committed to the University of Florida out of high school. But the temptation of running pro was too powerful and they chose signing with Nike.

Football, too? Christian Coleman, 24 – If the former University of Tennessee All-American isn’t the fastest sprinter on earth, he could be the fastest football player. Coleman ran a 4.12 second 40-yard dash, faster than the best ever time from the NFL Combine. On the track, Coleman’s bests are 9.76 and 19.87 in the 100 and 200. He won the 100 meters at the 2018 World Championships in Doha.

Both sides of the Atlantic: Zharnel Hughes, 24 – Technically, he runs for Great Britain, but was born in The Valley, Anguilla, in the Caribbean. He trains with the Racer’s Track Club in Jamaica under Glen Mills with Blake as a teammate. Hughes won the 2018 Euro Championships in the 100. His best times in the 100 and 200 have been 9.91 and 20.02.