Usain Bolt dashes off with medal 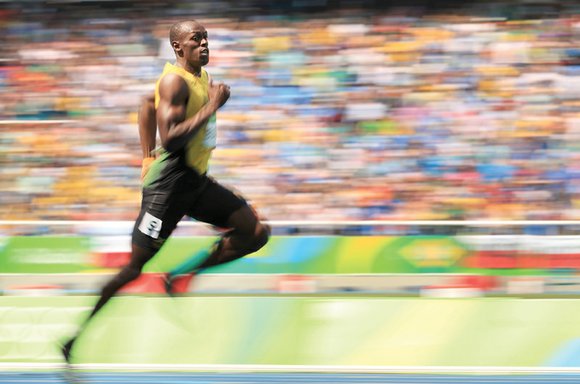 Jamaica, homeland of the incomparable Usain Bolt, ranks 139th in the world in population but it’s No. 1 in terms of speed.

The Caribbean island of some 2.95 million people deserves the title “World’s Fastest Country” based on its domination in 100-meter dash Olympic competition.

Clearly the fastest man in history, Bolt cruised to his third straight 100-meter title last Sunday in Rio de Janeiro. He won with a time of 9.81 seconds.

No one has ever won the gold in that competition three consecutive times.

Carl Lewis won in 1984, then was belatedly credited with a first-place victory in 1988 after Ben Johnson was disqualified.

The always loose and entertaining Bolt, who punctuates victories with his “To the World” pose, won the 100 meters at the Beijing Olympics in 2008 and the London Olympics in 2012.

He cruised through the quarter- and semifinals, never shifting into top gear, but building drama and anxiety among fans.

In the finals, Bolt faced longtime nemesis Justin Gatlin of the United States. Gatlin, who had the best qualifying time, beat Bolt out of the blocks, as expected.

Then the inevitable: With about 40 meters left, long-striding, hard-charging Bolt, in signature gold spikes, blazed past Gatlin, leaving the field of competitors in his wake.

Jamaican runners have a rich history in the 100-meter competition, although many of the island’s athletes don’t always compete for their home country.

Linford Christie won the Olympic 100 in 1992 for Great Britain and Donovan Bailey prevailed in 1996 for Canada.

Both Christie and Bailey are native Jamaicans.

Also Jamaican born Ben Johnson won in 1988 for Canada, but his title was later erased due to a drug violation.

Jamaica’s honor roll of world-class sprinters goes way back. Jamaican Herbert McKenley was second in the Olympic 100 in 1952 and countryman Lennox Miller was second in 1968.

On the women’s side, Jamaicans finished an unprecedented first, second and third in 2008, with Fraser-Pryce striking Olympic gold.

In Rio, Bolt saved his best for last. With a giant smile that screamed confidence and delight, he pounded his chest with his thumb as he broke the tape, winning Olympic gold in the 100.

“All I have to do is stay cool and be back in the race at 60 meters,” Bolt told NBC commentator Ato Boldon.

Fans began chanting, “Bolt! Bolt! Bolt!” as he worked the crowd like no one else can.

Bolt is favored to “three-peat” in the 200 later this week and also to pace Jamaica to its third straight 4x100 relay gold. If he wins, that would give Bolt nine gold medals in nine tries over three Olympiads on three continents.

He turns 30 on Sunday, Aug. 21, the day of the Rio Olympics’ closing ceremony.