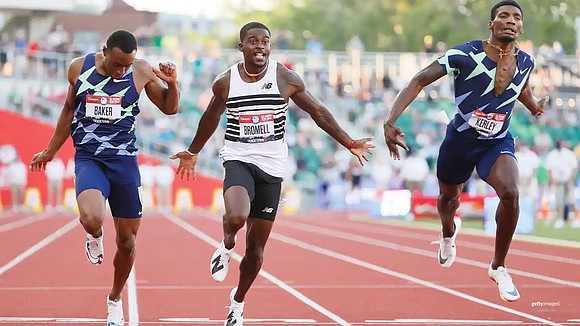 Trayvon Bromell’s first trip to the Olympics ended with no medals, a painful injury and a ride out of the stadium in a wheelchair.

His prospects for the Summer Games in Tokyo, however, are considerably brighter.

The 26-year-old former Baylor University All-American is in the top of the conversation for “World’s Fastest Human.”

This is his second Olympics. Competing at the 2016 games in Rio de Janeiro, Bromell suffered a heel injury in the 4x100 relay and tumbled to the track at the finish line. He later underwent surgery on his foot to remove bone spurs and had two additional surgeries for Achilles’ heel injuries.

After a rough patch involving lengthy re-habs and precious training time, the 5-foot-8, 156-pound native of Florida has shifted back into top gear. Endorsed by New Balance, Bromell won the Olympic trials last month in Eugene, Ore., in 9.80. Earlier this summer, he ran a 9.77 in a meet in Miramar, Fla.

Bromell will be joined in Tokyo by U.S. teammates Ronnie Baker and Fred Kerley, who finished second and third in the U.S. Olympic trials.

Among those not sprinting in Tokyo is American Christian Coleman, who was suspended for drug violations. Coleman had been an Olympic favorite at one time.

Also not running in the 100 are Americans Justin Gatlin and native Virginian Noah Lyles, who finished seventh and eighth at the trials.

In 2016, Bromell finished a disappointing eighth in the 100 meters and then things got worse on the relay. Due to a baton exchange violation, the Americans were disqualified. Bromell finished his anchor leg and tumbled to the track in agony.

Since returning, he is undefeated in both 2020 and 2021, with 14 straight victories over that distance.

Bromell wants to forget 2016 and complete the feel-good story of “From Wheelchair to World’s Fastest.”

In Olympic history dating to 1896, American men have won the gold in the 100 meters 16 times, while taking 14 silver and nine bronze medals.

With American Sha’Carri Richardson out of contention, the favorites to win the women’s 100-meter crown are both Jamaican – 2016 Olympic champion Elaine Thompson-Herah and 2008 and 2012 winner Shelly-Ann Fraser-Pryce, the 5-foot “Pocket Rocket.”

Richardson won the U.S. trials with a time of 10.86, but was later disqualified for a drug violation.

Representing the United States women in Tokyo will be Javianne Oliver, Teahna Daniels and Jenna Prandini, who finished second, third and fourth, respectively, at the trials.

American Florence Griffith Joyner, or “FloJo” as she was called, set the Olympic record of 10.62 in 1988 in Seoul. 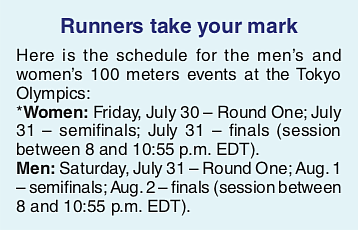