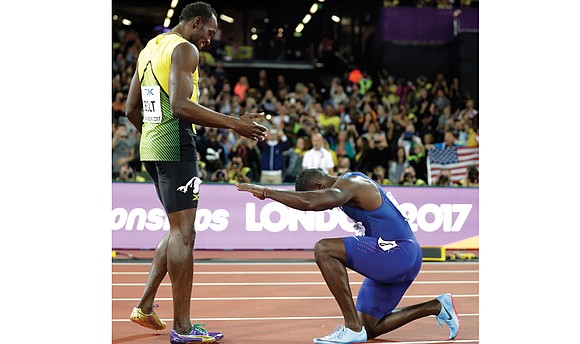 For the first time in nearly a decade, the world’s fastest man isn’t named Usain Bolt.

Justin Gatlin has regained that title again after holding off the iconic Jamaican in the 100-meter final of the World Championships of Athletics last Saturday in London.

In what was billed as Bolt’s final individual race before retiring, Bolt finished third behind Americans Gatlin and Christian Coleman.

“I couldn’t see them,” Gatlin told the Associated Press following the race, “but they couldn’t see me, either.”

Acknowledging Bolt’s greatness, Gatlin kneeled and bowed to his longtime adversary moments after the race.

“I wanted to pay homage,” Gatlin told reporters. “This night is still a magical night for track and field and Usain Bolt. I’m just happy to be one of his biggest competitors.”

The long-limbed, 6-foot-5 Bolt got off to a typically slow start bursting out of the blocks. However, this time, he wasn’t able to overcome his faster competitors, although a photo was required to determine the place of the finishers.

In semifinals earlier that same day, Bolt finished a narrow second to Coleman, but neither man seemed to be pushing it to the limit in the final meters.

An Atlanta native, Coleman is a 5-foot-9, 21-year-old who competed for the University of Tennessee this past spring. Gatlin also ran for Tennessee before turning pro following his sophomore season in Knoxville.

Always a fan favorite, Bolt maintained his Hollywood smile as he jogged around the track following the race, Jamaican flag in tow. Many of his green and gold clad Jamaican countrymen had crossed the Atlantic to witness his grand finale.

In defeat, the gracious Bolt even stopped to do his signature “To Di World” pose, much to the approval of adoring followers.

“It doesn’t change anything,” he told the AP regarding his rich legacy. “I lost the race to a great competitor. I came out here and did my best. I’ve done all I can for the sport and myself.”

The Olympics, held every four years, and the World Championships, held every other year, are the premier attractions in track and field and are viewed nearly equally on the global stage.

He holds world records for the 100- and 200-meter competition.

It’s not all over. Bolt still has one race to go. He plans to anchor Jamaica’s always formidable 4x100 relay team this weekend at the world competition. And he could always change his mind about retirement.

The 35-year-old Gatlin, with flecks of gray in his hair, won the Olympic 100-meter race in 2004 in Athens, but later was saddled with two suspensions related to performance-enhancing drugs.

Because of the former doping charges, Gatlin was roundly booed by the fans at the London world competition throughout the trials and finals.

While he is now the world’s fastest man, he may hear Coleman’s young footsteps chasing him down.