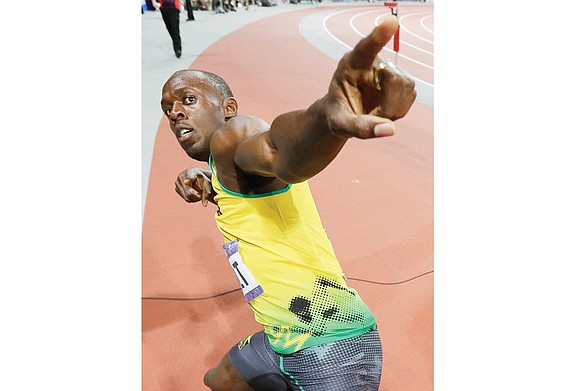 Usain Bolt may be nearing his final finish line.

The iconic Jamaican sprinter, long hailed as the “World’s Fastest Human,” has announced he is retiring following the upcoming IAAF World Championships in Athletics at London’s Olympic Stadium.

The widely anticipated event will be televised by NBC.

Bolt, 30, said he will not compete in his other signature individual event, the 200 meters, although he has qualified. He may run on Jamaica’s always-powerful 4x100 relay, with the final on Saturday, Aug. 12.

He also anchored Jamaica’s victorious 4x100 relays at all three Summer Olympic Games, but the 2016 title was revoked when a teammate failed a drug test.

Before Bolt, no man had ever won the Olympic 100 meters twice in a row on the track, much less three times.

American Carl Lewis won on the track in 1984 and finished second in 1988, only later to be named champion when first-place finisher Ben Johnson was disqualified.

Of late, Bolt has been active on the Diamond League circuit, winning the 100 meter on July 21 in Monaco with a time of 9.95.

The other fastest men on the planet have been chasing Bolt for a decade, with little to show for their efforts other than a view of Bolt’s back during the race and his “To Di World” pose following it.

But nothing regarding retirements is carved in stone. The extraordinarily popular Bolt, easily the world’s top track attraction, could always have a change of heart.

So in case anyone is wondering, the 2020 Summer Olympic Games will be in Tokyo.