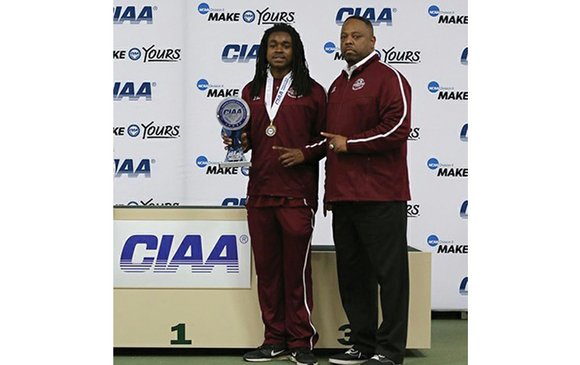 Chazton McKenzie is the master of multitasking at Virginia Union University.

The recent CIAA Indoor Track and Field Championships in Winston-Salem, N.C., served as a showcase for his versatility.

He was just loosening up.

Then the ultralean 6-foot, 178-pound sophomore from Pompano Beach, Fla., went on to win the grueling seven-event heptathlon.

Track and field represents just half of his athletic success on the Lombardy Street campus.

Wearing No. 86 for the Panthers football team, he caught 29 passes for 470 yards and five touchdowns last fall, helping VUU to its first NCAA bid since 1992.

His rare blend of speed, strength, jumping ability and agility makes him a coverage nightmare for opposing players on the gridiron.

“My track experience is a definite help on the football field,” he says.

So is McKenzie a track star who also plays football, or a football hero who runs track?

“I just go with the flow,” he told the Free Press. “Whatever sport pops up first is what I enjoy most. My favorite sport is whatever is in season. I came (to VUU) for track, but Coach (Mark) James gave me a little bit of a chance in football. Now I love that, too.”

McKenzie’s athletic scholarship is for both track and football, but weighted more heavily toward track.

For that, he’ll pass on upcoming spring football to concentrate on outdoor track.

For his considerable achievement in Winston-Salem, McKenzie was named the CIAA Field Events MVP. It stands for Most Valuable Performer, but Most Versatile Panther also fits.