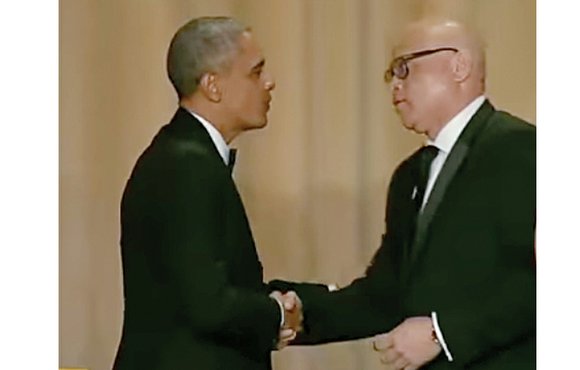 Mr. Wilmore’s use of the word shed light on a debate among many in the African-American community: Those who feel it is an offensive slur and shouldn’t be used in any context, and others — including Mr. Wilmore — who feel that using it as a term of endearment among African-Americans robs the word of its negative power.

“I knew that it would be provocative and, yes, I was taking a big chance,” Wilmore told the Associated Press in an interview Tuesday. “But you know what, it was just a creative expression that I made at the time. I don’t know if I would take it back.”

He said that “at this point, I think it may open up a dialogue that at the end of the day is probably pretty good. And if I have to take the heat for it, that’s OK. Part of my job is to take the heat. I certainly dished out a lot of stuff.”

Mr. Wilmore said the president was “very kind and very warm” to him and the White House said Monday that President Obama wasn’t offended.

With a bit of nostalgia, President Obama reflected on his more than seven years in office, saying he had been a young man of idealism and vigor before he became president.

“Eight years ago, I said it was time to change the tone of our politics,” President Obama said. “In hindsight, I clearly should have been more specific.”