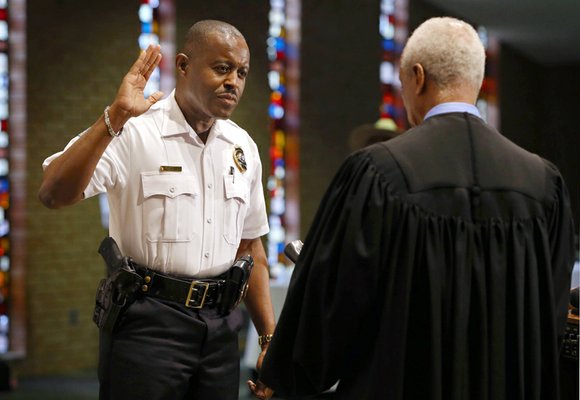 Delrish Moss is sworn in May 9 as the new police chief of Ferguson, Mo., just weeks after a federal judge approved the town’s agreement with the federal Justice Department seeking to resolve racial bias in its criminal justice system. David Carson/St. Louis Post-Dispatch via Associated Press

Ferguson, Mo., the site of violent protests after a white police officer shot and killed an unarmed black teenager in 2014, swore in an African-American police chief Monday.

The swearing-in of Delrish Moss, a 51-year-old veteran of the Miami Police Department, comes less than three weeks after a federal judge approved an agreement to reform Ferguson’s police department and municipal law code. The reforms are intended to fix what the U.S. Justice Department cited as widespread racial bias in the city’s police department.

The racial composition of the police in Ferguson, a St. Louis suburb of 21,000 people, has been a source of controversy because most officers are white, while two-thirds of the town’s residents are black.

The Justice Department initiated a civil rights investigation into Ferguson’s policing after Michael Brown, 18, was shot and killed by Officer Darren Wilson in 2014.

He is the third police chief in Ferguson since Mr. Brown’s death. Ferguson erupted into violent protests after a grand jury chose not to indict Officer Wilson.

Thomas Jackson, who was chief at the time of Mr. Brown’s death, resigned in March 2015 after being criticized for the handling of the resulting protests. Interim Chief Andre Anderson, the city’s first black chief of police, resigned in December.

Mr. Brown’s death was one of several killings of unarmed black men that started a nationwide debate about the use of excessive force by police, especially against minorities.

The Justice Department found Ferguson police disproportionately arrested and issued traffic citations to black people to boost city coffers through fines, used police as a collection agency and created a culture of distrust that exploded when Mr. Brown was fatally shot.

The reform agreement requires that Ferguson provide its officers with bias awareness training and implement an accountability system, city officials have said. The city also agreed police must ensure that stop, search and arrest practices are not discriminatory under law.