Federal prosecutors will seek the death penalty for a man accused of killing the pastor and eight parishioners in a racially motivated attack at an African-American church in Charleston, S.C., last June, the U.S. Justice Department said Tuesday.

“The nature of the alleged crime and the resulting harm compelled this decision,” Attorney General Loretta Lynch said in a statement. 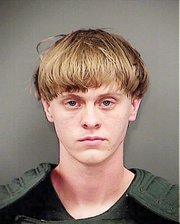 Dylann Roof, 22, is accused of opening fire on June 17, 2015, during Bible study at Charleston’s historic Emanuel African Methodist Episcopal Church in a massacre that shook the country and intensified debate over U.S. race relations.

He faces 33 federal charges, including hate crimes, obstruction of religion and firearms offenses.

In a court filing, federal prosecutors cited a number of factors for seeking the death penalty, saying Mr. Roof singled out victims who were black and elderly, and showed no remorse. They also cited “substantial planning and premeditation.”

A friend of Mr. Roof, 21-year-old Joseph Meek, pleaded guilty last month to concealing his knowledge of Mr. Roof’s intention to carry out the attack, saying then that Mr. Roof planned the shooting for six months and wanted to start a race war.

Mr. Roof’s lawyers have said he would agree to plead guilty rather than face trial if prosecutors ruled out capital punishment. But defense attorney Michael O’Connell, declined comment on Tuesday’s decision when reached by phone.

Mr. Roof also faces the death penalty if convicted on separate, state murder charges in a trial set to begin in January.

The state prosecutor trying the case said last September that some of the victims’ families were opposed to a death sentence because of their religious beliefs, while others felt it was appropriate.

Steve Schmutz, an attorney representing families of three victims, said his clients “support whatever decision the U.S. government is making in this case, and I’m sure they support this decision.”

“It’s a great message being sent by the government that this won’t be tolerated,” Kevin Singleton, whose mother was among those killed, told the local Post and Courier newspaper.

The relative of another victim cited the Bible in calling for Mr. Roof to spend his life in prison rather than die.

Federal prosecutors rarely seek the death penalty against defendants. Only three federal prisoners have been executed in the past half-century and none since 2003, according to the Death Penalty Information Center. The best known of those was Timothy McVeigh, responsible for the 1995 bombing of the Oklahoma City federal building that killed 168 people.

Mr. Roof is due back in federal court in Charleston on June 8, when prosecutors are expected to discuss a trial date.

The Rev. Clementa C. Pinckney, the church’s senior pastor and a well-respected state senator, was killed in the massacre, along with eight of his church members.