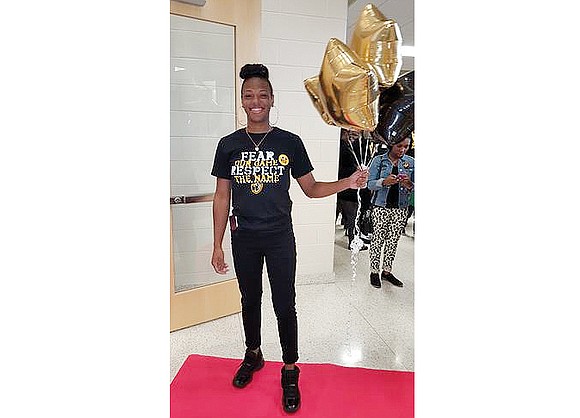 Taya Robinson is the latest Falcon to announce her intentions of becoming a VCU Ram.

Coincidentally, Robinson’s coach at Huguenot is none other than Bo Jones Jr., who was among VCU’s all-time scorers (1,334, 1998 through 2001) under Coach Mack McCarthy.

The Huguenot-to-VCU path was first traveled in the 1970s, when Gerald Henderson signed under VCU Coach Chuck Noe.

It helps that the schools are just 7 miles apart.

Robinson commences her senior season with 1,452 career points. She is second all-time at Huguenot behind Daeisha “Dae-Dae” Brown, who had 1,975 points before moving on to Longwood University in 2012.

On the male side, Coach Jones is the Falcons’ all-time scorer with 1,900 points. He played at Huguenot under his father, Coach Bo Jones Sr.

Robinson is the kind of versatile athlete who might lead the Falcons in scoring, rebounding, assists or steals, or all of the above. She’s at home anywhere on the court.

“I’d go so far as to compare her style to LeBron” James, said Coach Jones Jr. “Her first priority is to get all her teammates involved. But if she has to, Taya can mash the gas.”

As a freshman, she poured in 41 points in a regional playoff game against Lafayette.

Answering to “Bubble Gum,” Robinson is the daughter of Mark and Teresa Robinson. Mr. Robinson is a former football standout at Virginia State University and a former Armstrong High School football coach.

Along with her athletic prowess, Robinson is a consistent honor roll student.

She was introduced to hoops at the Manchester YMCA on an 8-foot basket and soon after joined a program at Saint Paul’s Baptist Church.

As a junior, Robinson averaged 22 points, five rebounds and four assists but missed the latter part of the season with a leg stress fracture.

East Carolina, Mississippi, Auburn and Virginia Tech were the other colleges on Robinson’s list.