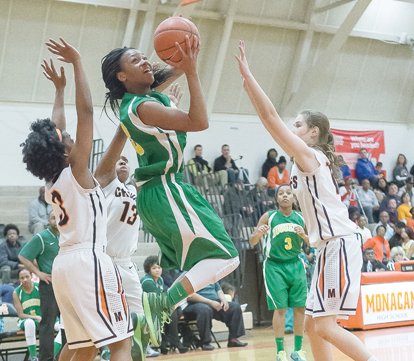 Now there are two good reasons to visit Huguenot High School — to eyeball the sparkling new school and to observe the Falcons’ sophomore basketball star.

Few glow brighter with a basketball in her hands than Taya Robinson, a 5-foot-10 tower of talent who has drawn nationwide recruiting attention.

According to ProspectsNation. com, a recruiting service, Taya is the ninth-rated player in the United States overall and ranked No. 4 nationally among wings (guard-forward combo) in the Class of 2017.

“I get a couple phone calls every day and lots of emails,” said Huguenot coach Bo Jones Jr. “They ask about academics and social skills before they even get into the basketball.

“Of course with Taya, they like everything they hear.”

They appreciate the skills they see on the court, too.

On the day this interview was conducted, Hernando Planells, Duke University’s assistant coach, dropped by the Forest Hill Avenue high school just for a peek. In accordance with NCAA regulations, college coaches are not permitted to initiate contact with sophomores.

“Many of the smaller schools back off once they hear who’s recruiting her,” said Jones.

Taya, who is nicknamed “DJ Bubble Gum,” resides with her parents, Eleanor and Mark Robinson, in South Richmond.

The Robinsons and Joneses have an athletic history.

Taya recalls cheering for her dad’s Armstrong Wildcats’ football teams. “The first sport I ever wanted to play was football,” Taya said with a friendly giggle. “I wanted to be the quarterback.

“It wasn’t until my father told me that wasn’t going to happen that I got into basketball.”

Taya actually attends Richmond Community High School on North Side and commutes to Huguenot via school bus each afternoon.

Because Community High has no athletics, students are allowed to compete for their “neighborhood school,” which is how Taya made the Huguenot team. An excellent student, her classes includes Advance Placement Chemistry, 11th grade English, World History II, Pre-Calculus, Art and Driver’s Ed.

But no license is required for the kind of “driving” Taya does on the hard court.

“Taya likes to drive — right or left. She’s at her best taking it to the basket. That’s her game,” Jones said.

Last season as a varsity freshman, her 28-point average included a 41-point explosion in a state semifinal victory at Lafayette High School in Williamsburg.

Ninth grade accolades included Conference 26 and Region 3A East Player of the Year and first-team 3A All-State.

There has been no tapping of the brakes.

She’s averaging about 34 points, five rebounds and four assists per game as a sophomore and skipped past her career 1,000-point plateau late last month.

Wearing No. 23 and her hair in long braids, Taya is on pace to break Huguenot’s point record of 1,975 set by Daeisha Brown, Class of 2013, who is now at Longwood University.

The state scoring record for girls is 3,290, held by La’Keshia Frett, Class of 1993 at Phoebus High School in Hampton. Locally, the all-time scorer is Henrico High School’s Chantel Adkins, with 2,320 points.

Taya’s hoops roots can be traced to the Manchester YMCA, where she played mostly against boys.

From the YMCA, she moved on to a youth program at St. Paul’s Baptist Church.

“What I remember most about that was getting a dunk,” she said, noting it was on an eight-foot bucket. Now on a full 10-foot hoop, she’s about a half-inch shy of touching the rim.

She has sparkled on every level.

Taya spurred the Lucille Brown Panthers to a city middle school title in the fall of her eighth grade year.

A 3A school in terms of enrollment, Huguenot High School competes against mostly Division 4, 5 and 6 schools during the season before entering the 3A playoffs.

“All season, we play some of the best big schools in Virginia,” said Jones, referring to Cosby, L.C. Bird, Monacan and Midlothian High schools.