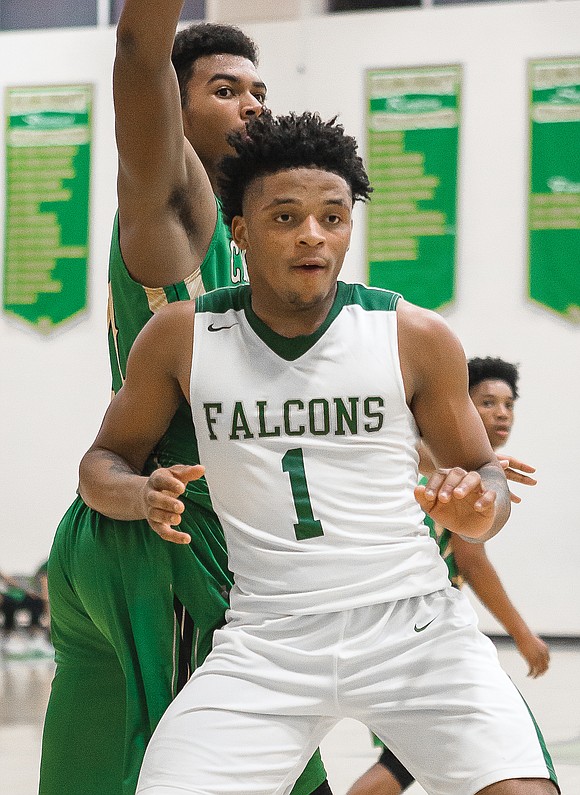 Huguenot High School wasn’t able to play any home basketball games a season ago due to extensive water damage to its wooden court. All games were on the road or at Lucille M. Brown Middle School.

This season, with the court problem resolved, the Falcons are playing a full home schedule at their spacious facility on Forest Hill Avenue in South Side that opened in January 2015.

A year ago, Huguenot High School had a mountain-sized basketball team, with a towering front line with players measuring 7-foot, 6-foot-6 and 6-foot-4.

With a pause, Brown added, “But we’re still confident we’ll have a good season.”

The 2018 edition of the Falcons were 17-8, while winning the region title and advancing to the State 4A semifinals at Arthur Ashe Jr. Athletic Center.

Since then, 7-foot Eric Rustin has enrolled at Tennessee Prep in Cleveland, Tenn., and 6-foot-6 Region Player of the Year Deshawn Ridley has gone to Wallace Community College in Alabama.

That leaves Coach Brown with an extremely athletic roster, but one lacking in height. It has taken some getting used to. The Falcons lost their first three games this season before winning three straight.

In a recent 76-73 loss in double-overtime at Clover Hill High School, Huguenot’s 6-foot-1 Kevin Gayles was matched up inside against the Cavaliers’ 6-foot-6 Nick Blair.

Blair got his 20 points. But Gayles, also an outstanding football receiver, held his own with 14 points and 14 rebounds.

The Falcons rely on creating havoc with full-floor defensive pressure and using their quickness to drive to the hoop. With plenty of speed and leaping ability, Coach Brown’s squad may look more like a track team than a 4A basketball outfit.

At 6-foot-2, junior Jerron Fleming Jr., another football player, is the tallest Falcon in regular rotation.

Older hoops fans will recognize the name Hargett. Jonathan Hargett Sr., father of the Huguenot player, is a former Highland Springs High School standout who went on to become a starting guard at West Virginia University.

One of Jonathan Jr.’s uncles, the late Mike Hargett, starred at Highland Springs before playing collegiately at George Mason and Virginia Commonwealth universities.

Coach Brown is in his second season coaching the Falcons after previous stints as hoops coach at Meadowbrook High School in Chesterfield County and activities director at Armstrong High School in Richmond.

Knowing about the highs and lows of an ever-changing roster, Coach Brown isn’t complaining about getting “caught short” this season.

“That’s the way it goes in high school basketball,” he said. “One thing, though, it’s not like last year. We can’t be overconfident against anyone.”