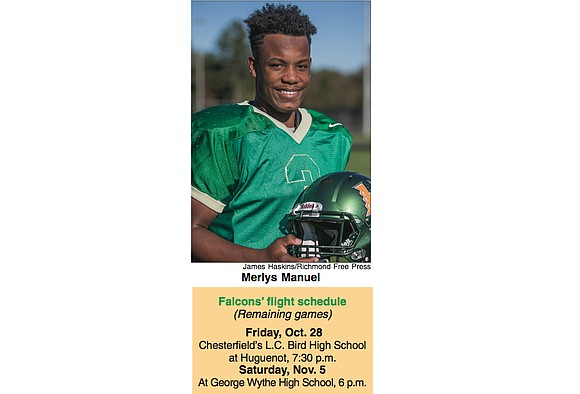 Already as quarterback, he has been handed the keys to the Falcons’ offense.

For now, Manuel is steering the Forest Hill Avenue program back to football respectability.

Manuel boasts a lively throwing arm, quick feet and, just as importantly, the talent to maintain composure under pressure.

“I think of myself as mostly a pocket passer, but I can run if I have to,” he said confidently.

The oft-airborne Falcons are frequent fliers but have a quality ball carrier in Milton Johnson (565 yards).

Meanwhile, Manuel’s right arm has worked overtime. Through eight games, Manuel has completed 111 of 253 passes for 1,305 yards and 14 touchdowns, including four in Huguenot’s thrilling 42-35 win over Chesterfield’s Clover Hill High School on Oct. 14.

“Merlys is a true quarterback,” said Coach Jennings. “By that, I mean he’s not an athlete converted from another position. He led our Junior Varsity to a strong season (8-2) a year ago. Now he’s getting into varsity rhythm.”

Manuel, along with his teammates, was never in better rhythm than in the second half of the game against Clover Hill.

The Falcons overcame a 21-point deficit to record its first win over a non-Richmond opponent since 2009. Huguenot scored 30 points in the third period.

“Now we need to come out and play every first quarter like we played that third quarter,” said Manuel.

It was Huguenot’s second win of the season, which may not sound like much until you review the history.

“The Clover Hill game was a huge boost to our program,” said Coach Jennings. “It should show the players that hard work and determination pay off. It gave them a reason to believe in themselves.”

Many players on the team were part of the 8-2 JV squad a year ago.

Manuel and his fraternal twin brother, Myles, grew up in Highland Springs and Charles City County. Their mother died when they were 8. Following her death, they moved to Richmond with their father, Marcellus Manuel, a former basketball captain at Highland Springs High School in Henrico County.

Quarterbacking runs in the family. The Manuels are related to E.J. Manuel, the Buffalo Bills quarterback originally from Virginia Beach.

Merlys got his football grooming in the Broad Rock Association.

The all-round athlete played football, basketball and baseball last year at Huguenot, and is thinking about adding track this year.

Twin Myles doesn’t compete athletically but is the junior class valedictorian and a standout with the Robotics Club.

Merlys, also an Honor Roll student, says this about the sibling differences:

“Myles is about a half inch taller than me, but a lot lighter.”