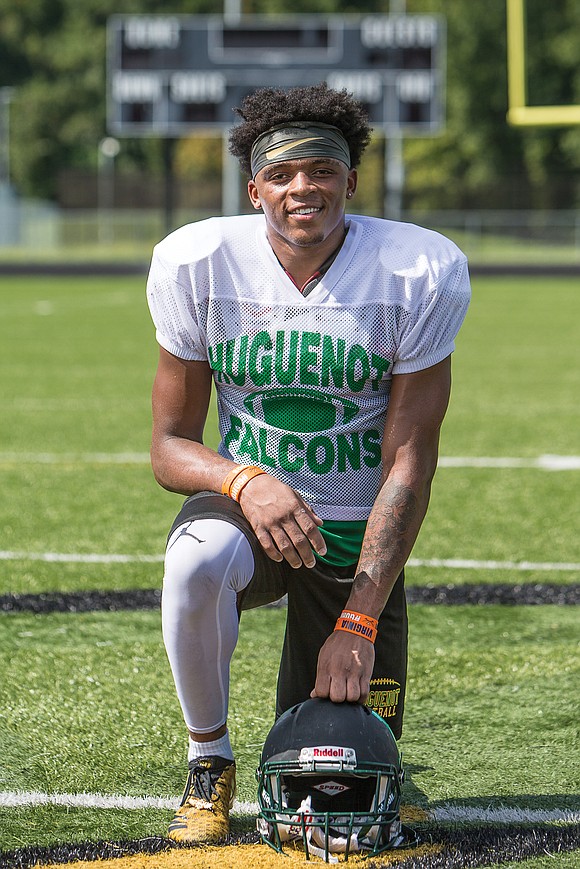 Kevin Gayles Jr. knows the way to the end zone.

“I like scoring touchdowns because of what it does for my teammates,” he said. “You can see the excitement in their faces. It makes them play that much harder.”

Gayles’ name and the mention of touchdowns often are included in the same sentence.

The 6-foot-1, 195-pound junior tallied 16 touchdowns last year as a sophomore and added three more this season in the Falcons’ opening victory at Booker T. Washington High School in Norfolk.

Against the Norfolk school, Gayles had five catches for 153 yards and two touchdowns, plus an 80-yard kickoff return that wound up in, you guessed it, the end zone.

The Huguenot-Jamestown game was suspended midway in the first half because of harsh weather, with the Falcons up 7-0. The game will resume Oct. 10.

Under first-year Coach Jared Taylor, the Falcons’ next game is Friday, Sept. 7, at James River High School in Chesterfield County.

It’s not like Gayles is going to catch anyone by surprise anymore. His ever-expanding résumé will draw special attention from rival defenses.

To help combat that, he’ll line up at various spots in the Falcons’ attack to keep opponents’ guessing.

“Kevin is already one of the top receivers in Virginia,” Coach Taylor said. “He’s a special, special kid. And the great thing is that he has a work ethic to match his physical talents.”

“They rolled out the red carpet for us,” Coach Taylor said.

Ohio State University is another school in contact with the 16-year-old Falcon.

Gayles wears the green and gold No. 3 jersey for a reason.

In his younger years, Gayles was more about art than athletics.

“I stayed inside, drawing mostly,” he said. “My uncle told me I needed to get outside more and play with the boys, and he signed me up for the rec league.”

Playing fullback and linebacker, he was part of some city championship teams with the Southside Ducks.

His conversion to receiver came in ninth grade on Huguenot’s junior varsity team. As a sign of six pointers to come, Gayles snared 14 touchdown passes as a JV player from Tyler, now his varsity battery mate.

Tyler backed up Merlys Manuel at quarterback last season. Manuel is now on a football scholarship at Virginia State University.

Gayles is blessed with multiple talents. His artwork has drawn much attention. In elementary school, he drew the yearbook cover — a raven — for the G.H. Reid Elementary School Ravens.

Other examples of his work have been displayed in Huguenot hallways.

His athleticism extends to the basketball court. Gayles was a key component last winter on Huguenot’s glory ride to the State Division 4 finals.

His brother, Lamont, a freshman, doesn’t play football but plans to try out for Huguenot basketball.

Gayles’ football success is as much about preparation as physical attributes.

Asked about hobbies, he responded, “All I do at home is watch football videos of other wide receivers. Odell Beckham Jr. is my favorite. I watch the college and NFL players and study all they do.”

Gayles is clearly a student of the game.

Then under Friday night lights, he’s the one teaching the lessons, often holding class in the end zone.