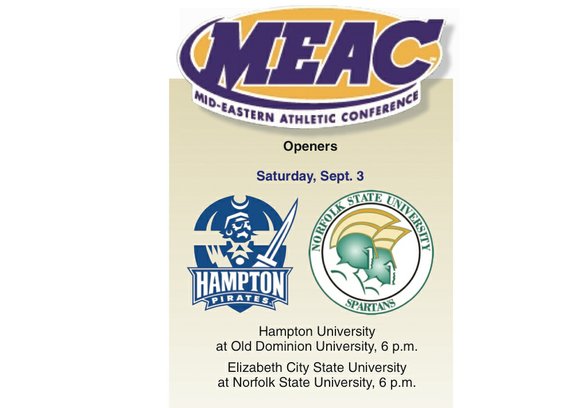 The Elizabeth City-NSU contest is a renewal of the long-standing Labor Day Classic.

As members of the Mid-Eastern Athletic Conference, or MEAC, HU and NSU are affiliated with the Football Championship Subdivision (FCS) of the NCAA.

Old Dominion is a member of Conference USA of the Football Bowl Subdivision (FBS) — the top tier. ODU plays home games at Foreman Field, which was Norfolk State’s home turf prior to the opening of Dick Price Stadium in 1997.

Elizabeth City State plays in Division II of the CIAA.

Under Coach Connell Maynor, HU went 7-4 a year ago, with 39 touchdowns and averaging 352 yards per game.

The Pirates feature All-MEAC wideout Twarn Mixson, who made 59 receptions in 2015 for 1,027 yards and nine touchdowns.

After traveling to ODU, Hampton will return to Armstrong Stadium on Saturday, Sept. 10, to face the College of William & Mary of the FCS.

The Spartans showcase versatile back Gerald Johnson, who ran for 463 yards and caught passes for another 213 yards last season.

For decades, the MEAC champion advanced to compete in the FCS playoffs, with little success on the field or financially to show for the efforts.

ESPN is paying MEAC and SWAC $1 million each for broadcast rights.