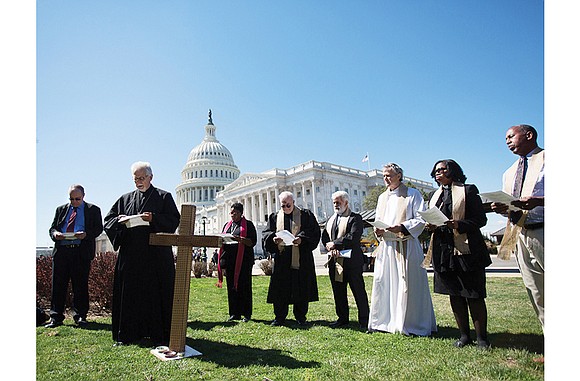 With ashes on their foreheads, sackcloth draped around their necks and the U.S. Capitol as a backdrop, Christian leaders used the words “evil” and “immoral” to describe the federal budget cuts President Trump has proposed and many Republican lawmakers favor.

“It is a time for lamentation,” said the Rev. David Beckmann, explaining the symbols of grief the clergy brought last week to Capitol Hill.

Rev. Beckmann, president of Bread for the World, a Christian nonprofit that works to combat hunger, gathered with more than two dozen representatives of national churches outside the Capitol complex on March 29 for a day of protest.

They said their understanding of the Bible compels them to speak out against planned reductions in programs that protect the poor and the environment, provide foreign aid and fund the Justice Department’s civil rights division.

How can we tolerate cuts to the civil rights division, asked the Rev. Barbara Williams-Skinner, co-chair of the National African-American Clergy Network, “at a time when hate has gone on a rampage in America?”

President Trump’s budget blueprint, released in March, calls for deep cuts in social spending and for a significant budget increase for the military. The spending bills that make up the actual federal budget are voted upon by the House of Representatives and the U.S. Senate.

After taking turns at the podium, clergy and lay supporters walked to the Senate side of the Capitol, where they placed a waist-high wooden cross on the grass and prayed for the nation’s vulnerable and the strength to confront lawmakers with whom they disagree.

“There cannot be a budget that puts children in danger by defunding after-school programs,” continued Rev. Copeland-Tune, head of the Ecumenical Poverty Initiative. “Empower us as we leave this space and go forth to meet with our members of Congress.”

Together, three times, the group sang the hymn “Ubi Caritas,” which translates to “Live in Charity,” and they lifted their arms toward the Capitol dome in a closing prayer.

The coalition of faith leaders, which calls itself the “Circle of Protection,” planned an afternoon of lobbying House and Senate members representing both parties.

Several in the group — which includes representatives from Catholic, mainline Protestant, evangelical, Orthodox and African-American churches — noted that these denominations often differ from one another on doctrine and tone. But they are united on the biblical mandate to care for the vulnerable. Many times they recited from the Gospel of Matthew 25:3, “Blessed are the poor in spirit, for theirs is the kingdom of heaven.”

Jim Wallis, editor of Sojourners magazine, thanked Democratic Rep. Joe Kennedy of Massachusetts, the only lawmaker to attend the event, for invoking the verse during the recent debate over the failed GOP health care bill.

“In times of division and discourse in our government, our faith steadies us,” Rep. Kennedy, who is Catholic, told the gathered clergy. “It is our connective thread and a common compass.”