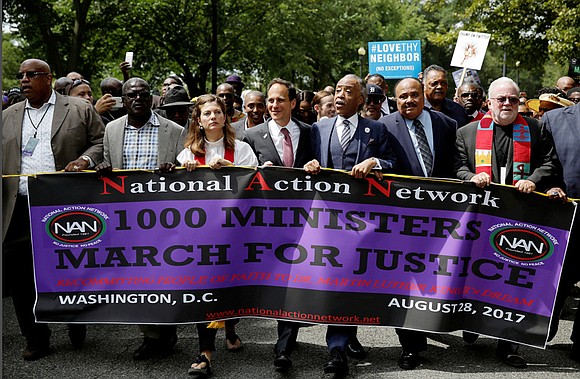 From Protestant preachers to Jewish cantors to Catholic nuns, religious leaders of a range of faiths demonstrated in the nation’s capital for racial justice, criticizing the silence of some within their own ranks on the subject of white supremacy and questioning the morality of Trump administration policies.

“We wanted to say this nation is in moral trouble,” the Rev. Al Sharpton told those assembled at the King Memorial.

One protester carried a sign that read, “Repeal and Replace Trump Pence,” a reference to the efforts by President Trump and Vice President Mike Pence to halt the Affordable Care Act health care coverage signed into law during the Obama administration.

The march originally was planned to protest increased hate crimes, mass incarceration and discrimination and to call on the Trump administration and U.S. Attorney General Jeff Sessions to address those issues.

But the recent violence in Charlottesville, where neo-Nazi, white supremacist and white nationalist protesters clashed with anti-racism activists, prompted increased interest in the gathering and widened its scope.

Sister Patricia Chappell, executive director of Pax Christi USA, decried white supremacy. She said, as a black Catholic nun, she believes “even our institutional church is racist” and needs to address some of its policies and practices.

Many of Monday’s participants — from Buddhists to Baptists — had planned to be at the march before the Charlottesville events spurred more to join them. Some speakers ticked off a number of other issues that concern them, such as criminal justice, health care reform and voter suppression efforts.

“You’re going to see the victims of Nazism, the victims of white supremacy march today to the Justice Department and say, ‘We don’t care what party’s in. We are not going to be out,’ ” Rev. Sharpton said just before leading the march through downtown Washington.

The Rev. Jamal-Harrison Bryant, an African Methodist Episcopal church pastor from Baltimore, criticized evangelical ministers who support and advise the president “and declare erroneously an outright lie — that Donald Trump is a man of God.”

“He is not God’s man,” Rev. Bryant said. “They do not reflect the body of Christ at large.”

The Rev. Jim Wallis, founder of Sojourners magazine and social justice organization, said the demonstration was “theological” because “the soul of the nation and the integrity of faith” are at stake. He called on clergy to speak out against white supremacy.

“We have to preach from every pulpit in America that racism is America’s original sin,” he said.