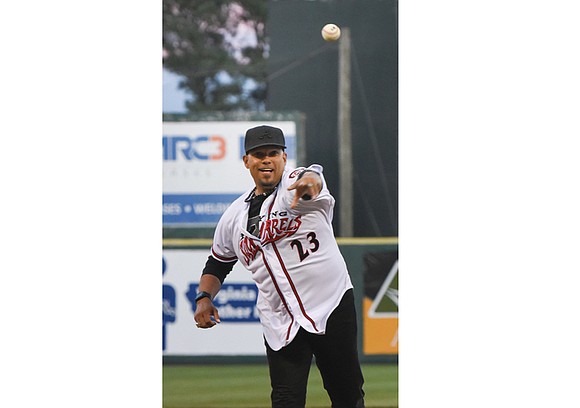 Three-time All-Star outfielder David Justice throws out the ceremonial first pitch at the Richmond Flying Squirrels opening day April 6 at The Diamond. Because his flight was delayed, his pitch came during the game’s third inning. Clement Britt

The Richmond Flying Squirrels’ eighth season at The Diamond opened in a big way — a big crowd, big winds, a big home run and a big victory.

And one more — a big surprise (more on that later).

A sold out baseball stadium of 9,560 people on Thursday, April 6, braved a sustained west wind of 20 mph, with gusts much higher, to see Richmond rout the Hartford Yard Goats 11-1.

Many wind-swept customers were still looking for their seats, or ordering food from an expanded concession menu, when muscular Chris Shaw showed why he is among the top prospects for the Flying Squirrels’ parent team, the San Francisco Giants.

On the first pitch he saw in the first inning, the 6-foot-4, 255-pound, left-handed swinging first baseman launched a horsehide rocket that didn’t come down until it was well beyond the right-field fence. Shaw is a 2015 first round draft pick out of Villanova University.

It would be Richmond’s lone home run, but the hit parade continued. Eastern League rookie Miguel Gomez had two of the 13 safeties, while also knocking in two runs and scoring twice himself.

Then there was the surprise.

After weeks of advertising that former Richmond Brave and three-time National League All-Star outfielder David Justice would be the guest celebrity throwing out the first pitch, he was absent at game time.

It wasn’t his fault. Because of stormy weather that produced Richmond’s high winds and heavy rain earlier in the day, many flights were canceled or delayed along the East Coast.

Justice arrived at the third inning when, in avant-garde style, he threw out “the first pitch” to start the Hartford third.

Justice was a good sport about it, going out of his way to accommodate as many autograph seekers as possible on a night that ended with an extravagant fireworks display that lit up the crisp spring night.

The wind faded, as did the Flying Squirrels’ momentum after the gala opening.

Richmond dropped two of the next three games to Hartford, an affiliate of the Colorado Rockies, and then the first game of a three-game series on Monday night to the Altoona Curve 2-1. The Flying Squirrels embark on a seven-game road trip to Reading, Pa., and Bowie, Md., on Thursday, April 13.

The Flying Squirrels return to The Diamond on Friday, April 21, to begin a three-game series with the Reading Fightin’ Phils. Then the Bowie Baysox, an affiliate of the Baltimore Orioles, comes to The Diamond for three games April 24 through 26.

Richmond opened the season with no African-Americans on manager Kyle Haines’ roster. The Flying Squirrels of color all hail from the Caribbean.

Switch-hitting, 24-year-old infielder Gomez has made strides since signing with San Francisco as an 18-year-old in the Dominican Republic.

Gomez, who is on San Francisco’s extended 40-man roster, had six hits through the first five games, swinging third in Haines’ lineup and playing second base.

Through the first five games, Richmond drew a league-leading 26,246 fans. Typically, attendance for weeknight games picks up once school is out for the summer.