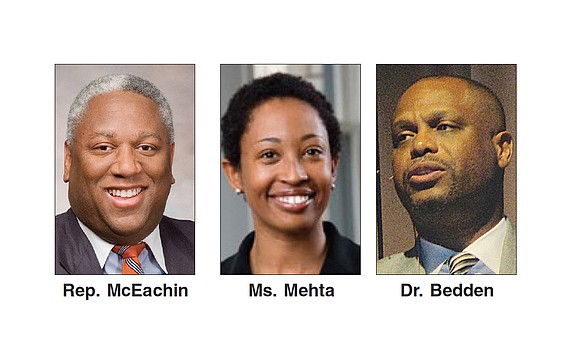 For example, RPS issued 6,667 short-term suspensions to 3,203 students for “disrespect/walking away” (29 suspensions), “defiance of authority/insubordination” (1,511 suspensions), “disruptive demonstration” (2,071 suspensions) and “classroom or campus disruption” (1,095 suspensions) and other minor, nonviolent offenses, according to the complaint. Advocates said such offenses would have resulted in a visit to the principal’s office years ago rather than suspension.

In a statement, RPS spokeswoman Kenita Bowers said, “The current administration is working diligently to ensure that all disciplinary actions are fair and consistent. The Student Code of Responsible Ethics Handbook is continuously reviewed and has been revised to move away from zero tolerance based discipline.”

But the 2015-16 handbook issued by Dr. Bedden is described in the complaint as one of several RPS disciplinary failures. The 70-page handbook was cited as “so vague that they provide inadequate notice of prohibited conduct and allow for subjective interpretation and selective enforcement.”

The complaint also said RPS’s disciplinary policies have a lack of standards for applying consequences and are vague.

Even the RPS alternative education resources for students, which include assignment to the Richmond Alternative School and home educational services, fall short, according to the complaint. The Texas-based instruction company with a $1.8 million contract to manage the Richmond Alternative School had a complaint filed against it last year for creating a “highly restrictive and overtly confrontational environment” at a school in Lancaster, Penn., which included pat-down searches, the expectation that students confront classmates who behaved negatively and being subjected to physical and violent restraint.

Despite the data and the investigation, Richmond Mayor Levar M. Stoney said his office remains committed to the Education Compact drawn up earlier this year between the Mayor’s Office, the Richmond School Board and Richmond City Council, said Jim Nolan, spokesman for the mayor.

“The mayor is very concerned about the details in the report and stands with Congressman McEachin in supporting a full and open investigation by the Office for Civil Rights into these allegations,” Mr. Nolan said.

“The administration will work with RPS and the School Board to make sure all students are provided equal access to a quality education and are treated equally and fairly in all disciplinary matters, regardless of race, gender, legal status or disability.”

One strategy, using social and emotional learning programs, provides children and adults with training to apply knowledge, attitudes and skills necessary to understand and manage emotions, set and achieve positive goals, feel and show empathy for others, establish and maintain positive relationships and make responsible decisions.

Rep. McEachin announced on Tuesday that he is launching a Special Needs Task Force to address the disparities in student treatment in public schools within the 4th Congressional District, including solutions for better disciplinary policy.

He said the results of the federal investigation will help determine the next steps in protecting students’ rights.

He also advises parents whose children are impacted by the problem to continue advocating for their children as did the RPS parents in the complaint.

“Find out your rights and stand up for your child,” Rep. McEachin said. “My office is happy to assist with specifically federal academic issues, and JustChildren also stands ready to assist parents. Resolving these problems will take dedicated individuals at all levels.”