Rep. McEachin requests federal investigation into high suspension rates for African-American students and those with disabilties 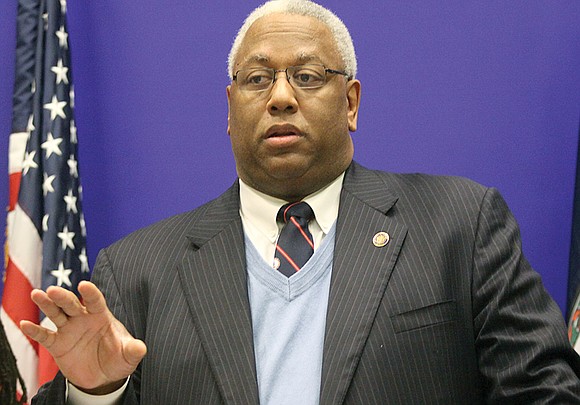 Congressman A. Donald McEachin has asked the U.S. Department of Education to investigate the disproportionately high suspension rates for African-American students and students with disabilities in his district.

His request, made in a letter Monday to U.S. Secretary of Education Betsy DeVos, seeks a prompt review by the Education Department’s Office for Civil Rights.

It also comes on the heels of a complaint filed in August with the Office for Civil Rights by the Richmond Branch NAACP claiming African-American students, particularly those with disabilities, are unfairly punished in Richmond Public Schools.

So far, there has been no response from the federal office.

“Unfair, unwarranted disparities in student treatment are completely unacceptable; the consequences for affected students are deeply harmful and, potentially, extremely long-lasting,” Rep. McEachin stated in his letter to Ms. DeVos.

“As you know, the federal government has a unique ability, and a correspondingly great responsibility, to help correct such injustices.

“Accordingly, I write to request that the Office for Civil Rights … investigate all documented disparities in the ways public schools in Virginia’s Fourth Congressional District treat their students.”

The district, which runs from Richmond to Chesapeake, also includes Henrico, Chesterfield and Petersburg.

In a phone interview with the Free Press, Rep. McEachin said his office made repeated requests to Henrico County Public Schools officials to provide reasons for the steady rise in the number of African-American students, some with disabilities, who are disciplined with suspensions and expulsions at a disproportionately higher number than non-African-American students.

As the son of a special education teacher, Rep. McEachin said his knowledge and work on disparities in education for African-American students with special needs goes back to the beginning of his political career in the Virginia General Assembly in the late 1990s.

“Unfortunately, the situation in many ways has worsened rather than improved,” he stated in his letter.

Data from reports by the Legal Aid Justice Center and the Virginia Department of Education bear that out.

In a review done at the request of Richmond schools Superintendent Dana T. Bedden of data collected from fall 2013 to spring 2016, the Virginia Department of Education found that city students with special needs were suspended or expelled at a rate 2.5 times that of their non-disabled peers.