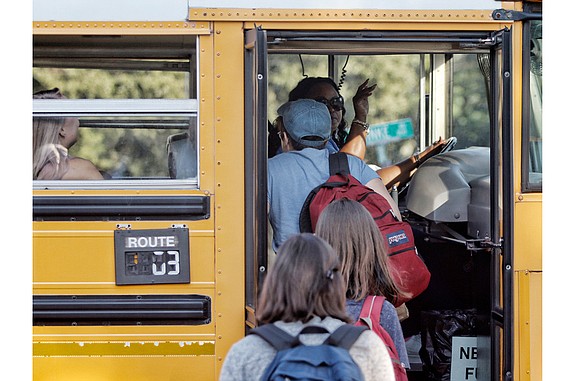 Fifty city school buses now are equipped with additional cameras to beef up security inside and to help identify scofflaw drivers who illegally pass the buses when students are getting on or off.

The 13 new cameras mounted on each bus are the result of a partnership between Richmond Public Schools and the Richmond Police Department, which hired Force Multiplier Solutions to install the extra cameras, officials said.

The 50 buses — or one in five of the 250 city school buses — are equipped with nine cameras on the outside and four on the inside that can monitor student behavior inside and watch traffic across a total of eight lanes, according to RPS officials.

The new stop-arm camera system is to be activated Monday, April 24, with police using information from the cameras to issue citations to drivers who pass a school bus when the flashing red lights and a stop sign are activated, the officials said.

The remaining 200 buses will be equipped with the cameras for the September start of the 2017-18 school year, said Superintendent Dana T. Bedden.

“We truly appreciate the police department’s assistance in improving safety for our students,” Dr. Bedden stated.

“These cameras will not only help identify violators on the outside of the buses,” he said, but also “assist our drivers to monitor activity on the buses as well.”

Funding for the cameras is to be paid from the $250 civil fines assessed against drivers who illegally fail to stop for school buses, police and school officials said.

“This technology is in the best interest of public safety and is especially important for our children,” Richmond Police Chief Alfred Durham said.