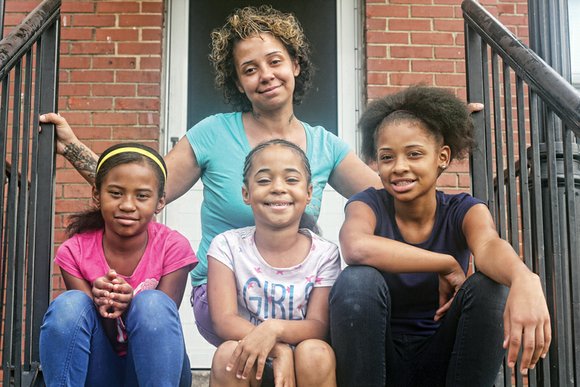 Tara Spencer sits on the porch of her apartment on Creighton Road with her daughters, from left, Dionicia, 8, La-Taja, 6, and Japria, 12. Photo by Sandra Sellars

Tara Spencer stands on her porch in the Creighton Court public housing community each school day and watches as her 12-year-old daughter, Japria, waits about 20 yards down the street to catch the bus to Martin Luther King Jr. Middle School where she is a sixth-grader.

Ms. Spencer, a 32-year-old single mother of three, said she is concerned for her daughter’s future safety after Richmond Public Schools announced a new bus transportation plan for the school year starting in the fall.

As approved by the Richmond School Board, the plan requires middle and high school students to go to the nearest elementary school to catch the bus to their respective schools.

The move is among the cost-cutting measures taken by the School Board to balance the 2016-17 budget.

Most students now catch the school bus at stops located much closer to their homes.

School officials told the Free Press last week they intend to notify parents and other caretakers of thousands of affected students early this month. They plan to send letters, emails, newspaper advertisements and other communications with the details.

Japria would have to walk about six blocks, or four-tenths of a mile, from her home on Creighton Road to Woodville Elementary School to catch a bus to Martin Luther King Jr. Middle School, located a little over a mile away. While the distance isn’t far, safety is a major factor, Ms. Spencer said.

“I don’t feel safe with that,” she told the Free Press, “When I was walking my two youngest children to Woodville in broad daylight one morning recently, people were shooting guns nearby on 29th Street. It happens all the time around here. It’s a long way for children to walk, especially on these treacherous streets.”

To ease her concerns, Ms. Spencer said she would be forced to consider rearranging her morning schedule next school year.

She would first wake her two younger daughters, Dionicia, 8, and La-Taja, 6, and they all would walk with Japria to catch her bus at Woodville. They would return home, and Ms. Spencer said she would dress her younger daughters, then walk them back to Woodville for classes.

Assistant Superintendent Tommy Kranz, who introduced the proposal to the School Board at its April 18 meeting, and Superintendent Dana T. Bedden told the Free Press that community reaction to the plan so far has been muted.

“I haven’t gotten many phone calls yet, but I imagine that a lot of people have not heard about it yet,” Mr. Kranz said.

Dr. Bedden downplayed the effect the change will have on students and their families.

“Kids go to bus stops every day. This is just another version of a bus stop,” he said.

“We want to work with (the community) to ensure we’re being efficient, effective and safe. All of those are priorities together. If there’s a safety issue, we’ll adjust and make sure that becomes a priority.”

Mr. Kranz told School Board members that RPS would save about $800,000 annually under the new transportation plan by reducing the number of buses needed to transport students to schools across the city and reducing other costs.

He said that school buses go on about 450 runs separately each morning and afternoon, not counting field trips and midday runs.

The school district is cutting costs and wants additional funding from City Council as it attempts to help close an $18 million budget gap.

Mr. Kranz told the Free Press that school leaders proposed the new plan after transportation costs skyrocketed well beyond what RPS budgeted as the district added a substantial number of buses and drivers in order to pick up students closer to their homes. RPS also transported a growing number of students to schools outside of their school zones.

Dr. Bedden said a chief reason for the switch to the new plan is, “We’re trying to make sure expenditures don’t exceed revenues.”

Mr. Kranz said many bus drivers were overloaded with too many bus stops and would fall further behind as the day went on, which meant that many students would arrive to school late in the mornings and arrive home later in the afternoons.

“Hub (the new system) allows us to reduce the number of buses,” Mr. Kranz said.

“We know this will be a challenge for some of our families,” Mr. Kranz said.