Who really can remove the Confederate traitors from Monument Avenue? According to the City Charter, it may not be the mayor or City Council 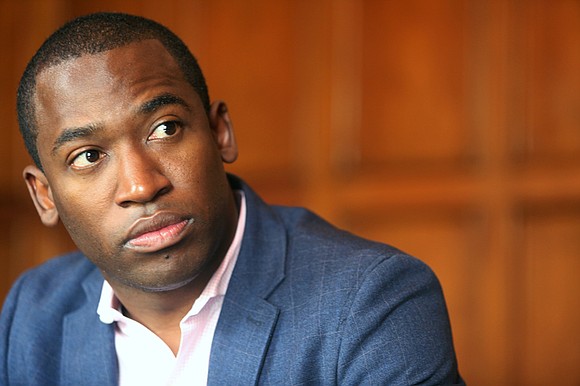 When it comes to the Confederate statues on Monument Avenue, Mayor Levar M. Stoney has been in the spotlight, along with members of Richmond City Council.

But Mayor Stoney and City Council have less control over whether the statues stay or go than Rodney M. Poole and his eight appointed colleagues on the city Planning Commission.

According to the City Charter, the Richmond Planning Commission holds the power when it comes to statues on public property — a fact almost unnoticed in the latest debate, particularly since the Aug. 12 violence in Charlottesville, where one person was killed and 19 others were injured by a white supremacist angry over plans to remove Confederate statues there.

The language of the City Charter or constitution is clear. Section 17.05 reads: “It shall be the further duty and function of the commission to preserve historical landmarks and to control the design and location of statuary and other works of art which are or may become the property of the city, and the removal, relocation and alteration of any such work …”

The Maggie L. Walker statue in Downtown is the most recent example of that authority. Plans for the Walker statue and plaza did not move forward until the Planning Commission — not City Council — approved the location and the design.

So far, Mr. Poole and his commission colleagues have remained studiously mum amid the rising emotions over the statues, allowing others to take the limelight.

The main reason for the silence, as Mr. Poole put it in a brief interview with the Free Press, is “there has been nothing for the Planning Commission to consider.”

While City Councilman Michael J. Jones has announced plans to submit a resolution to the council calling for the statues’ removal, that resolution has not yet been introduced. It also is unclear whether City Council can muster the votes to approve it.

Meanwhile, Mayor Stoney’s Monument Avenue Commission is still at work and has yet to produce any recommendations that the mayor could consider sending to the Planning Commission.

“If something comes before us,” Mr. Poole said, “the (Planning Commission) would follow its regular procedure. We would hold public hearings and then make a decision.”

Additionally, another city body may have an impact on any statue decision — the city Commission of Architectural Review, which is involved in the preservation of houses and other buildings in the city’s old and historic districts.

Among those districts is the portion of Monument Avenue on which the statutes stand. At this point, the architectural review commission’s involvement in any decision to remove statues is unclear, but is under study.

In addition, the statue of Robert E. Lee is state-owned and not in the city’s control.

One thing is certain: The question of whether the statues will remain is more complicated in the former capital of the Confederacy than in any other localities.

While City Attorney Allen L. Jackson did not respond to a Free Press request for comment, his office already has reminded Mayor Stoney and the administration about the Planning Commission’s authority, according to an internal email provided to the newspaper.

In the Aug. 18 email sent in response to queries from City Council members, Mr. Jackson stated that his office has “brought to the attention of the administration the potential need for review by the Planning Commission or the Public Art Commission (an arm of the Planning Commission) or both if the city should determine to place markers of some kind to provide ‘context’ for the statues.” 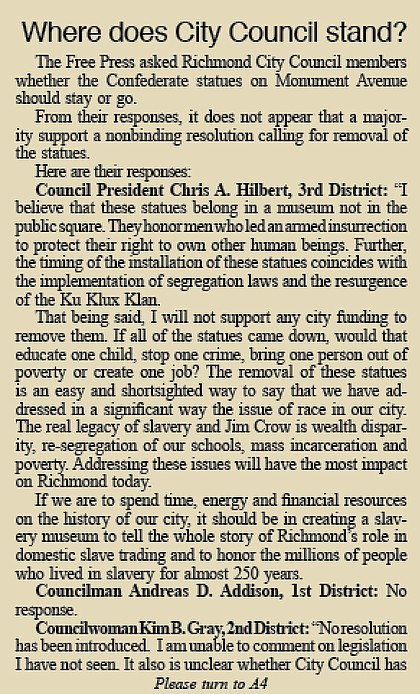 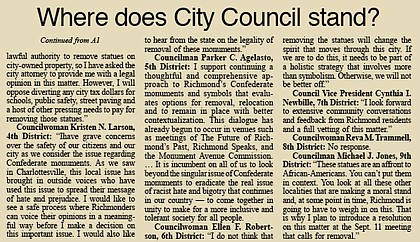