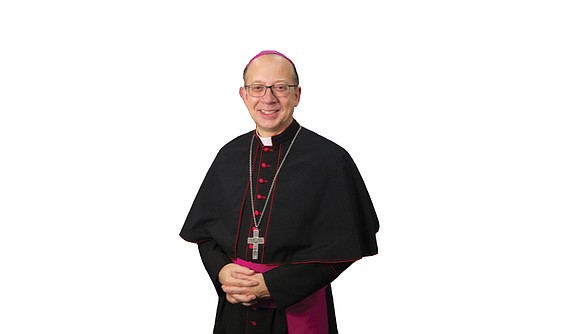 Bishop Barry C. Knestout has been named the next bishop of the Catholic Diocese of Richmond.

He succeeds Bishop Francis Xavier DiLorenzo, who died on Aug. 17.

The Vatican announced Pope Francis’ appointment of Bishop Knestout early Tuesday. Currently, he serves as one of three auxiliary bishops for the Archdiocese of Washington.

Bishop Knestout will be installed during a Mass at 2 p.m. Friday, Jan. 12, at the Cathedral of the Sacred Heart in Richmond.

He will lead a diocese that ministers to approximately 222,000 active Catholics in 150 parishes and missions within 74 cities and counties in central and southern Virginia stretching from the Eastern Shore to Southwest Virginia, and as far north as Harrisonburg. More than 9,000 students are enrolled in the 29 Catholic schools run by the diocese.

Cardinal Donald Wuerl, the archbishop of Washington, heralded the appointment in a statement issued Tuesday.

During Bishop Knestout’s time serving the Archdiocese of Washington, “he has demonstrated his pastoral skills, his commitment to the church and her teaching, and his devoted service to those entrusted to his care,” Cardinal Wuerl said.

He noted Bishop Knestout’s influence in helping organize the archdiocese’s first synod, his hand in working to revitalize the local Catholic educational system and his help in opening the new Saint John Paul II Seminary in Washington.

He said Bishop Knestout has served in a variety of capacities in the archdiocese, including as a pastor, auxiliary bishop, vicar general and moderator of the curia in which he helps Cardinal Wuerl oversee administrative affairs.

“With great appreciation, we thank Bishop Knestout as he takes on his new responsibilities and we ask God’s blessings on him,” the cardinal said.

The 55-year-old Bishop Knestout grew up in Bowie, Md., and studied architecture at the University of Maryland before entering Mount St. Mary’s Seminary in Emmitsburg, Md., in 1985. He was ordained a priest for the Archdiocese of Washington in June 1989.

In 1999, he was given the title of monsignor by Pope John Paul II. He was appointed auxiliary bishop of Washington and titular bishop of Leavenworth by Pope Benedict XVI.