Dr. Kinney retiring as dean of VUU’s School of Theology 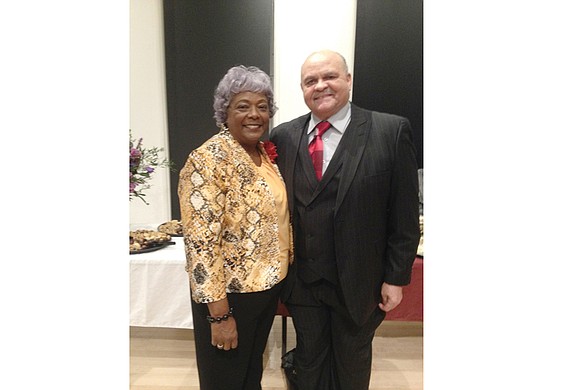 He said his “head and his heart” have told him this is the right time for him to give up the leadership post at the seminary. He also had the example of his wife, Quentina Kinney, who retired a few years ago as a city schoolteacher.

He officially retires June 30 from the post he has held since 1990, he told the Free Press at a special tribute program by Ebenezer Baptist Church and the Black History Museum and Cultural Center of Virginia honoring him last Friday.

His retirement as dean will come about two months after he celebrates his 70th birthday in April. He and his wife have seven children and 12 grandchildren.

He said he notified VUU officials to provide the board enough time to find his successor.

However, Dr. Kinney said he won’t be leaving the school. He plans to remain on the faculty as a professor of theology, continuing to teach as he has done before and during his tenure as the school’s leader.

Among other places he has taught during his career are Chicago Theological Seminary and the College of William & Mary.

He also plans to continue his role as pastor of Ebenezer Baptist Church in the Hanover County community of Beaverdam, where he has been the spiritual leader for 38 years.

A native of Wheeling, W.Va., Dr. Kinney earned a master’s of divinity from VUU. He is leaving the graduate theology school far stronger than he found it, with alumni found in churches across the area, the state and the nation.

“When I arrived, there were barely 100 students,” and the only offering was a master’s of divinitya , said Dr. Kinney, who earned his undergraduate degree from Marshall University and his doctorate in a joint program between Columbia University and Union Theological Seminary in New York.

Today, the school enrolls more than 400 students a year from across the country and has expanded its offerings during his tenure to include a master’s in Christian education and doctorate of ministry, he noted.

On his watch, the school also has worked with the Baptist Theological Seminary and Union Presbyterian Seminary to develop the Richmond Theological Consortium that allows students at each school to register for electives at the other campuses.

He also has been involved with Virginia Commonwealth University on a unique graduate program that provides a dual master’s in social work and ministry. The program involves studies at VCU and at VUU’s seminary or the Baptist Theological Seminary in order to equip students for ministries in which clinical and administrative skills in social work are considered critical.

He also is proud that VUU’s seminary has expanded its continuing education program to provide creative ways to accommodate students who cannot be full-time students, he said.

For example, he said students from cities like Baton Rouge and Chicago come to the campus to study in weeklong blocks that better suit their schedules. Others who enroll are able to take courses at a pace that accommodates their lives and families.

He said one reason the seminary has remained strong while others have struggled has been the stress placed on practical theology, meaning the seminary seeks to train ministers to make a difference in people’s lives.

“We seek to help our students understand faith and worship as it affects everyday life,” he said.

While the private, Baptist-affiliated VUU has been training people for the ministry since its inception in 1865, the graduate school dates to 1942 as the school began separating its undergraduate programs from its ministerial training. Later named for a former dean and VUU president, VUU’s seminary has been accredited by the Association of Theological Schools since 1971.

The school currently lists 23 faculty and staff, including Dr. Kinney, on its website.