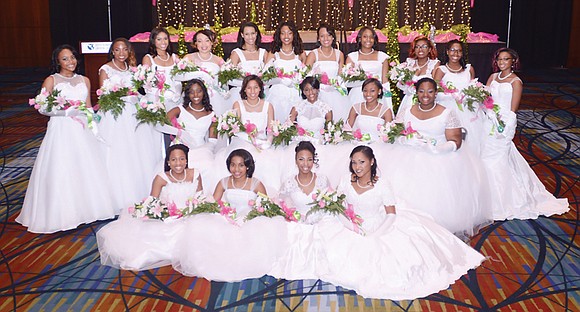 Twenty young women were presented by the Upsilon Omega Chapter of Alpha Kappa Alpha Sorority at its 2016 Debutante Presentation and Ball.

The theme for the formal event: “An Elegant Evening in Pink and Green.”

The ball was held Dec. 17 at the Greater Richmond Convention Center.

From August through December, the young women participated in a variety of activities and workshops, including sessions on communications and college entrance essay writing; social graces; and a healthy mind, body and soul. They also participated in a service project, mother-daughter luncheon and worship service.

The AKA Debutante Project serves as a source of funding for the AKA Shoe Bank, which the Upsilon Omega Chapter has sponsored since 1954 to purchase shoes for children in need in Richmond Public Schools and in surrounding counties.

Carolyn Johnson and Andrea Coleman are the Debutante Project Committee chairwoman and co-chairwoman, respectively. Johnelle Torbert was the chapter president during the ball, while Audrey Swann is the chapter’s current president.