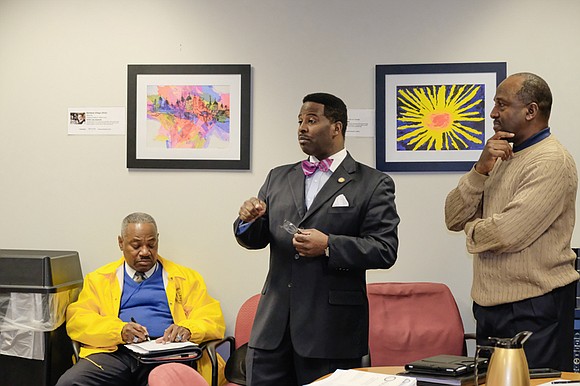 The Virginia State Conference of the NAACP announced its legislative priorities for the 2017 General Assembly session on Tuesday. The list of bills the civil rights group is supporting includes six Republican-sponsored measures that deal with student discipline policies.

The bills fit into the Virginia NAACP’s legislative priority of “ending the school-to-prison pipeline.”

The measures, three in the House of Delegates and three in the state Senate, are sponsored by Republican Delegate Robert B. Bell of Charlottesville and GOP Sen. William Stanley of Franklin County and have bipartisan support within their respective chambers. One would limit suspension terms to a 45-day maximum. Another would restrict long-term “disruptive behavior” suspensions to students who either intentionally cause physical injury or make credible threats to do so.

The remaining measure would prohibit suspension and expulsion for students in pre-kindergarten through fifth grade except in cases involving criminal activity.

State NAACP officials held a news conference at the State Capitol on Tuesday to announce the organization’s legislative agenda following its annual Lobby Day. About 45 members met with legislative leaders and Gov. McAuliffe’s administration officials and attended the various House and Senate committee meetings to advocate on behalf of issues.

NAACP officials said this year’s support of GOP-backed legislation spawns from an organizational “self-assessment” that is yielding changes in the group’s lobbying procedure, legislative agenda selection and recruitment efforts.

Jesse Frierson, chair of the state NAACP’s Political Action Committee, acknowledges that, typically, there is strong support for Democratic and left-leaning bills and not a great deal of support for those on the Republican side, but he said it’s a new day.

“Things have changed on the national level when it comes down to the body politic,” Mr. Frierson said. “I hear it over and over again: ‘We can’t keep doing what we’ve been doing and expect it to make progress in the future.’ ”

He said at the end of the day that the NAACP is interested in supporting “good” bills that protect its constituents.

Other issues on the group’s legislative priorities list include criminal justice reform through increasing the dollar threshold for grand larceny from $200; expanding voting rights; and promoting better mental health services by lifting a prohibition on psychiatric hospital admission for defendants under restoration of competency treatment orders.

Organizers said NAACP members talked with lawmakers about expanding economic opportunity in Virginia by raising the state’s minimum wage. Members said they were told such an increase would be hard to sell amid concerns from the business community and a Republican-controlled General Assembly that endorses trickle-down economics.

Already, a bill sponsored by Democratic Sen. Rosalyn R. Dance of Petersburg to raise the minimum wage to $15 by 2018 has been killed in the Senate Commerce and Labor Committee.