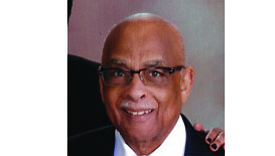 For The Rev. Joseph Roger Young, the call to ministry came late in life.

The retired insurance claims adjuster was 65 when he entered Union Presbyterian Seminary in Richmond to begin his new career.

He was 68 when he emerged from the seminary in 2004 with his master’s in Christian education and divinity, and 70 when he was ordained and called to his first pastoral assignment at Oak Grove Presbyterian Church in Amelia County.

Family and friends gathered Friday, July 7, 2017, at Ginter Park Presbyterian Church to remember the minister and Richmond resident they described as a warm, friendly and generous man who lived up to the Christian values he espoused.

The Rev. Willie Woodson, retired pastor of First United Presbyterian Church in North Side, where Rev. Young was a member for 43 years, delivered the eulogy.

Born in Caroline County, Rev. Young began teaching in Sussex County after graduating with an agriculture degree from Virginia State University. After six years with the public schools, he then shifted careers to work with Allstate insurance company, where he retired after 30 years.