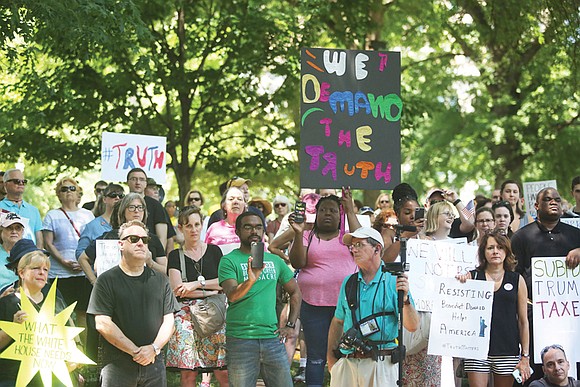 More than 600 people gather in Capitol Square last Saturday to call for an impartial investigation into Russian interference in the U.S. presidential election and Russia’s ties to President Trump, his 2016 campaign and his administration and associates. Richmond’s March for Truth was one of about 150 held during the weekend across the nation and in Europe. Speakers at the rally included Rep. A. Donald McEachin of Henrico; Corrina Lain, a University of Richmond law professor; Rachna Heizer of Lawyers for Good Government; and Jen Lawhorne of Progress Virginia. The march after the rally included a stop outside U.S. Sen. Mark Warner’s office at the SunTrust Center at 10th and Main streets. Sen. Warner is the ranking Democrat on the Senate Intelligence Committee, which is scheduled to hear the testimony of former FBI Director James Comey on Thursday. Mr. Comey was fired by President Trump on May 9. He is expected to face questions from the Senate panel on whether the president tried to pressure him to halt an investigation into former National Security Adviser Michael Flynn, whose links to Russia are under scrutiny.