Sen. Warner on Trump and Russia: ‘We have to find out the truth’ 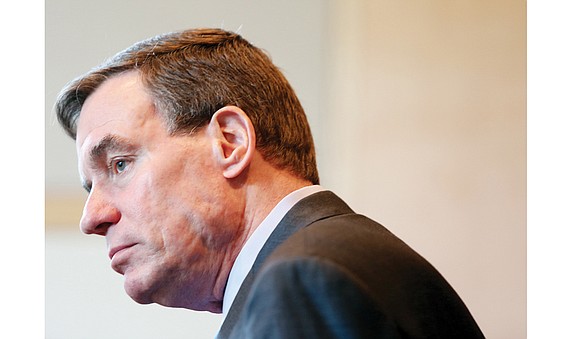 Special to the Richmond Free Press

U.S. Sen. Mark Warner of Virginia is in a high-profile position this spring as the top Democrat on the Senate Intelligence Committee, which is investigating Russian interference in the 2016 presidential election.

The committee began hearings in January and, after a short break, plans to resume them after the Senate’s spring recess ends Saturday.

Although most of the hearings have been behind closed doors, the panel has publicly interviewed six national security experts and academics and is expected to interview several key current and former aides to President Trump.

The Richmond Free Press posed questions to Sen. Warner about the importance of the probe, its progress and whether the national attention he is drawing might encourage him to make a White House bid of his own in 2020.

Q: You’ve called the Russian investigation “the most important thing I’ve ever done.” Why do you feel that way?

A: This investigation is ultimately about preserving the integrity of American democracy. We now hold indisputable evidence that Russia intervened in the 2016 presidential election. Both political parties were hacked by Russian agents and information was released with the intent to influence American voters. The Senate Intelligence Committee is working, in a bipartisan way, to provide the American people with the truth.

Q: What conclusions have you drawn so far about Russia’s involvement in the 2016 presidential election? What has surprised you the most? Disappointed you the most?

Russia set out to undermine the trust in American media by effectively paying close to 1,000 internet trolls to manufacture fake news and create an environment of suspicion and disinformation. Russia interfered in the American democratic process. And they are currently attempting to do the same thing in both the French and German elections.

Q:  Are you convinced President Trump and/or members of his campaign knew about Russia’s efforts?

A: We can acknowledge that there is certainly a web of connections between Trump aides and Russia. What I am interested in is discovering the implications of those connections. We have to find out the truth so that we can either remove the cloud currently hanging over this administration or provide the American public with conclusive evidence of complicity.

Q: Is there evidence that President Trump’s campaign coordinated events with Russia?

A: There are a series of people very closely affiliated with the Trump campaign who have extensive ties with Russia. This investigation aims to discover whether or not there was any active coordination.

Q: What is the goal of the Intelligence Committee’s investigation and when do you think it will be complete?

A: The goal of this investigation is to discover, in a bipartisan fashion, the extent of Russian influence in the 2016 presidential election and provide solutions that will protect our democratic process from foreign influence in the future.

Q: When you talk to voters around the state, are Russia’s actions on the top of their minds? How does this affect people? Why should people care about this?

A: The fact that the Russian government paid internet trolls to manufacture fake news should be a concern for everyone. In this climate of disinformation, it is extremely important for Americans to practice good “cyberhygiene.” What I mean by that is people need to be aware of both the benefits and the harms of social media.

Q: There is lots of speculation that your key role in the investigation could put you into contention for the White House in 2020. Are you eyeing a presidential run?

A: Right now, my attention is focused on this investigation. I think a lot of politicians make the mistake of looking too far ahead. I have a job to do, here and now, and I intend to do it well.