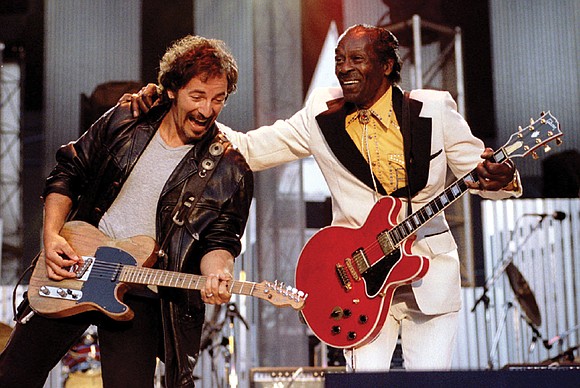 Chuck Berry, right, performs his highly popular tune “Johnny B. Goode” with Bruce Springsteen to open The Concert for the Rock & Roll Hall of Fame in September 1995 at Cleveland Stadium. File photo/Reuters

Chuck Berry, who duck-walked his way into the pantheon of rock ‘n’ roll pioneers as one of its most influential guitarists and lyricists, creating raucous anthems that defined the genre’s sound and heartbeat, died Saturday, March 18, at his Missouri home. He was 90.

Police in St. Charles County outside St. Louis said they were called to Mr. Berry’s home by a caretaker and found him unresponsive. Efforts to revive him failed. He was pronounced dead at 1:26 p.m.

Considered one of the founding fathers of rock ‘n’ roll, Charles Edward Anderson Berry was present at its infancy in the 1950s and emerged as its first star guitarist and songwriter. He electrified audiences around the world and was emulated by white performers who came to dominate American popular music.

Mr. Berry’s hits such as “Johnny B. Goode,” “Roll Over Beethoven,” “Sweet Little Sixteen,” “Maybellene” and “Memphis” melded elements of blues, rockabilly and jazz into some of the most timeless pop songs of the 20th century. Both The Beatles and The Rolling Stones, as well as the Beach Boys and scores of other acts, including Elvis Presley, covered Mr. Berry’s songs. 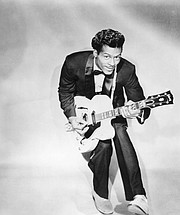 When Keith Richards of The Rolling Stones inducted Mr. Berry into the Rock and Roll Hall of Fame in 1986, he said, “It’s very difficult for me to talk about Chuck Berry because I’ve lifted every lick he ever played. This is the gentleman who started it all.”

Mr. Berry’s death came five months after he announced plans to release his first album of new music in 38 years — a collection of mostly original material recorded and produced by Mr. Berry, titled “Chuck,” and dedicated to his wife of 68 years, Themetta “Toddy” Berry.

“My darlin’ I’m growing old! I’ve worked on this record for a long time. Now I can hang up my shoes,” Mr. Berry wrote in a statement for the occasion, coinciding with his 90th birthday.

Born Oct. 18, 1926, Mr. Berry was the third of six children whose father was a contractor and church deacon and whose mother was a schoolteacher. They lived in a relatively prosperous African-American section of St. Louis known as the Ville.

In the first of his brushes with the law, he was sent to a reformatory as a teenager for armed robbery. After his release at age 21, he worked in an auto plant and as a photographer and trained to be a hairdresser.

Mr. Berry came along at a time when much of the United States remained racially segregated, but it was hard for young audiences of any color to resist a performer who delivered such a powerful beat with so much energy and showmanship.

Mr. Berry said he performed his signature bent-knee, head-bobbing “duck walk” across more than 4,000 concert stages. He said he created the move to cover up a near slip and fall on stage and it stuck.

Some critics suggested it was his former pianist, Johnnie Johnson, who composed the tunes while Mr. Berry only penned the lyrics. Mr. Johnson sued Mr. Berry in 2000 for song royalties, saying they were equal collaborators on many of the hits, but the case was dismissed on grounds that the statute of limitations had expired.

Mr. Berry first made his mark, playing with Mr. Johnson at black clubs in the St. Louis area at the musically ripe age of 27. He started filling in with Mr. Johnson’s group, known as Sir John’s Trio, in 1953, with the group evolving into the Chuck Berry Trio.

At the suggestion of blues legend Muddy Waters, Mr. Berry auditioned for Chess Records, the white-owned Chicago label that put out scores of blues hits. The result was the rockabilly tune “Ida Red,” which became a hit after it was retitled “Maybellene” and discovered by white audiences.

When the record came out, Mr. Berry said he was stunned to see that pioneering rock ‘n’ roll disc jockey Alan Freed and another man he had never met, Russ Fratto, were listed as co-writers, depriving him of some royalty payments. But Mr. Berry dismissed it at the time as part of the “payola” system that determined which records got radio play in the 1950s. He later regained all the rights to his compositions.

Mr. Berry’s only No. 1 hit was “My Ding-a-Ling,” a novelty song that seemed to be a juvenile sex reference.

As he became a star, Mr. Berry irked some in St. Louis by acquiring property in a previously white area and opening his own nightclub, where another legal scrape nearly ended his career.

At a show in Texas in 1959, Mr. Berry met a 14-year-old Native American girl and hired her to work at the St. Louis club. She later was fired and then arrested on a prostitution charge, which led to Mr. Berry being convicted for violating the Mann Act, transporting a woman across state lines for immoral purposes. He was sent to prison in 1962 for a year-and-a-half and wrote several songs while incarcerated, including “No Particular Place to Go.”

Mr. Berry had more trouble in 1979 when he was convicted of tax evasion, serving four months in prison, and in the 1990s, when a number of women accused him of videotaping them in the bathrooms of his restaurant-club in Wentzville, Mo.

While the hits did not keep coming for Mr. Berry, the tributes never stopped, and he continued playing a monthly show at a St. Louis nightclub into his late 80s. He received a Grammy Award for lifetime achievement in 1984 and his 1986 induction into the Rock and Roll Hall of Fame made him part of the inaugural class.

Illustrating his influence, a recording of “Johnny B. Goode” was included in a collection of music sent into space aboard the unmanned 1977 Voyager I probe to provide outerspace a taste of Earth culture.