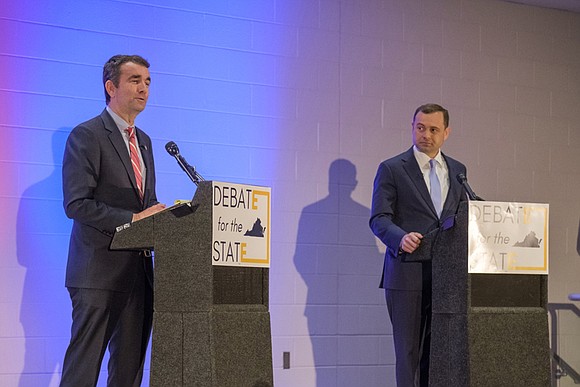 The two men seeking to capture the Democratic gubernatorial nomination traded political barbs over their party bona fides during a debate Tuesday night in Henrico County.

The exchange marked the first time Lt. Gov. Ralph Northam and former Congressman Tom Perriello had made increasingly critical comments of one another while sharing a stage.

The event was held before an audience of about 150 people at the International Brotherhood of Electrical Workers Local 666 Union Hall in Highland Springs and was organized by unions and other advocacy organizations, including the Virginia AFL-CIO, Black PAC, New Virginia Majority, SEIU Virginia 512 and Progress Virginia.

The two are vying in a June 13 primary for the Democratic nod to run for Virginia’s governor in the November general election.

The pair spent most of the hourlong discussion in agreement on a variety of issues. Both expressed support for increasing Virginia’s hourly minimum wage to $15, increasing workforce development and technical skills training, combating the rise in opioid and heroin use and allowing Virginia localities to declare themselves so-called sanctuary cities for residents who are immigrants, despite threats from President Trump to cut off federal funding.

The night’s major disagreement arose as the candidates dealt with a question on education affordability. Both have indicated a desire to move Virginia toward providing two years of free community college for residents, but their approaches are different.

Lt. Gov. Northam calls for a “G3: Get Skilled, Get a Job, Give Back” plan with an estimated upfront cost of about $37 million. The program would require a yearlong public service commitment from participating students enrolled in certification programs for certain technical training.

Officials with the Northam campaign say the cost to jump start the plan would be covered in part by consolidating certain existing workforce training programs and by the increased income tax revenue expected to come from program graduates who would earn higher wages. Lt. Gov. Northam said previously that the state could expect to yield a return on the education investment after five years.

Meanwhile, Mr. Perriello explained during the debate that his strategy to pay for free community college is part of his larger economic reform proposal with an estimated price tag of $1 billion. The plan includes closing certain tax loopholes and making cuts to the administrative and management costs of the Virginia Lottery and the Virginia Retirement System.

His plan also calls for gradual tax hikes for people who earn $500,000 or more annually. Mr. Perriello said the increased tax revenue would allow the state to put more resources toward lifting those at the bottom into the middle class.

“I think this is a difference between our approaches and plans,” said Lt. Gov. Northam, jabbing at his opponent’s ideas midway through the debate. “I think you have to be realistic in Virginia. Virginia is a fiscally responsible state. And to raise taxes … that’s not realistic in Richmond.”

Their arguments over funding free community college led both men to question one another’s allegiance to the Democratic Party.